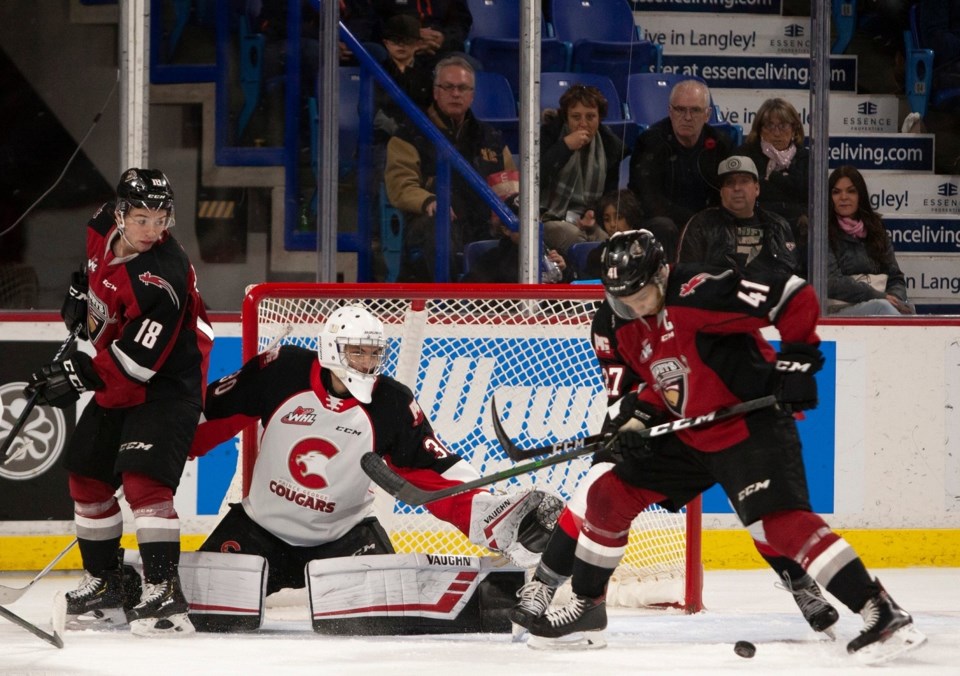 The gods of hockey finally favoured the Prince George Cougars and how fitting for them to show up on a Sunday.

The Cats rolled out of Vancouver yesterday afternoon (Oct. 27) with a 3-2 win in overtime over the Giants, thanks to a one-timer from defenceman Ryan Schoettler glove-side with just 31 seconds left in the extra frame.

Goaltender Tyler Brennan got his second win by stopping 37 of 39 shots on the road going between the pipes for an injured Taylor Gauthier, who didn’t suit up following the lower-body setback on Saturday (Oct. 26) in Tri-City.

The 16-year-old is also now responsible for two of the Cougars’ four wins in the 2019-20 season thus far.

On the other side, Vancouver netminder Trent Miner faced 33 shots, blocking 30 of those pucks from Prince George.

The visitors got things going by reaching a 2-0 lead after the first period.

Reid Perepeluk and Ilijah Colina each got their second goals of the year; Perepeluk completing a two-on-none rush and a give-and-go pass from Josh Maser at 9:05, while Colina converted on a power-play seven minutes later after being fed in front by Filip Koffer.

The Czech import took a bounce off the far wall to give Colina a quick wrister from the face-off circle; Cole Moberg was given the second assist.

Vancouver was able to erase the two-goal deficit in the second stanza, scoring regulation and power-play markers themselves to make it 2-2 through 40 minutes.

After third period saw no action on the scoreboard, the B.C. Divisional contest was sent to overtime, where Schoettler lit the game-winning lamp with 31 seconds to go for the 3-2 victory.

Maser and Moberg helped on the goal to cap off their respective two-point afternoons.

Together with Saturday’s 5-2 setback against the Tri-City Americans, Prince George improves to 4-9-0-1 on the season and are 1-1 on their current four-game road-trip.

The Cougars are in Kelowna Friday (Nov. 1), then hop over the U.S. border to finish their four-game season series with the Chiefs in Spokane on Saturday (Nov. 2).

Brennan won’t join his teammates those two nights as he’ll be with Team Canada at the 2019 World Under-17 Hockey Challenge in Medicine Hat, Alta. and Swift Current, Sask.

Prince George Cougars ousted on Oktoberfest by Spokane’s late-game runaway
Oct 20, 2019 8:30 AM
Comments
We welcome your feedback and encourage you to share your thoughts. We ask that you be respectful of others and their points of view, refrain from personal attacks and stay on topic. To learn about our commenting policies and how we moderate, please read our Community Guidelines.