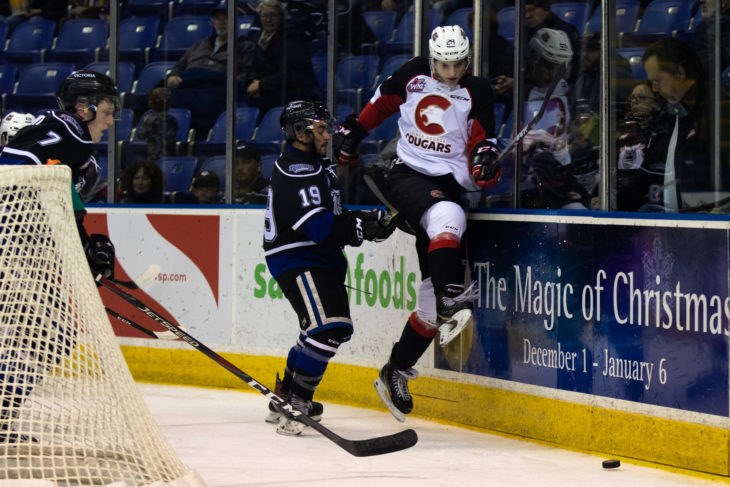 It seems to be getting worse and worse by the night.

The Prince George Cougars dropped another game Friday evening (Dec. 14) in Victoria against the Royals.

The Cougars got off to the start they wanted, opening the scoring at 12:27 of the first period by Rhett Rhinehard tallying his third of the season but after that, it was all downhill.

The Royals would score five unanswered, with two in the second period from Dino Kambeitz (5) and Tarun Fizer (8) and three in the third period from Kaid Oliver (15), Brandon Cutler (7) and Phillip Schultz (6) to take the contest 5-1 at the Save-On-Foods Memorial Arena.

Prince George goaltender Isaiah DiLaura stopped 29 of 34 shots in the loss while Brock Gould kept 34 of 35 shots out of the net.

With another loss, the Cougars now sit at 11-18-1-2 on the season and last in the B.C. division with 25 points. Including their current four-game losing streak, in the last 10 games, Prince George is 2-8. Their record away from the CN Centre is a troubling 4-9-1-1.

It won't be any easier for the Cougars as they face the Vancouver Giants in the Lower Mainland tomorrow afternoon (Dec. 16) at 4 p.m.

Prince George will look to head into the Christmas break on somewhat of a high note before being back in action in Seattle against the Thunderbirds on Dec. 28.