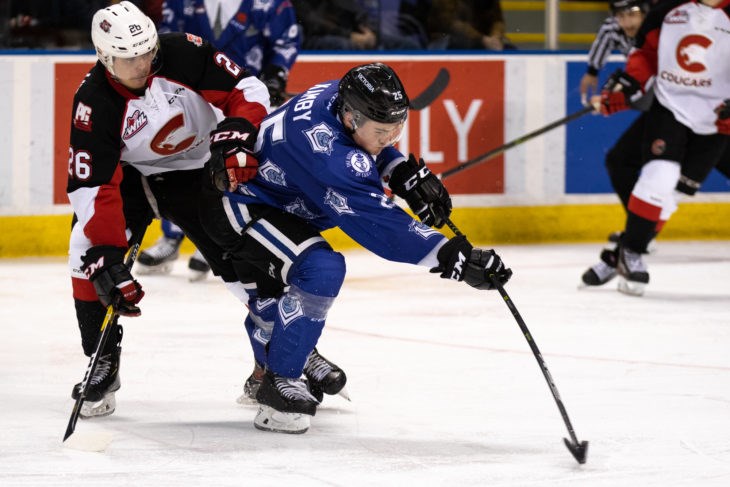 The Prince George Cougars continue to crumble at the end of the 2018-19 season.

The Cats extended their losing streak to five games after a 5-2 setback in Victoria Saturday night despite going into the final frame with a tie.

Prince George got the contest to 2-2 halfway through the second period, scoring two goals on 17 shots in the frame alone to the Royals’ five.

Josh Maser lit one of the two lamps, his sixth straight game with a goal and his team-leading 27th of the season, five minutes into the middle frame assisted by Reid Perepeluk.

Jack Sander four minutes later with his second of the year; Cole Beamin and Jackson Leppard provided the helpers.

The Royals followed up with three unanswered goals in the third, two from Phillip Schultz, and handing Cougars the eighth loss against the provincial capital’s team this year

Taylor Gauthier was in net for a second straight night and stayed between the pipes the entire night, stopping 27 of 31 shots from Victoria.

The Cougars return to the CN Centre Friday (March 8) and Saturday (March 9) for a doubleheader against the Portland Winterhawks.

Friday will recognize organ donation as Prince George will wear Don Cherry-inspired jerseys, while Saturday is the second and final Mega 50/50 Jackpot Night.

👍🍇 We're suiting up on Fri, Mar 8 and we want you to come cheer us on! #WHLSuitsUp

Tag the good Canadian kids that you'd bring to the game for a chance to win 4️⃣ tickets! Winners will be contacted on Wed, Mar 6.

Another attempted comeback started too late for Prince George Cougars
Mar 2, 2019 7:35 AM