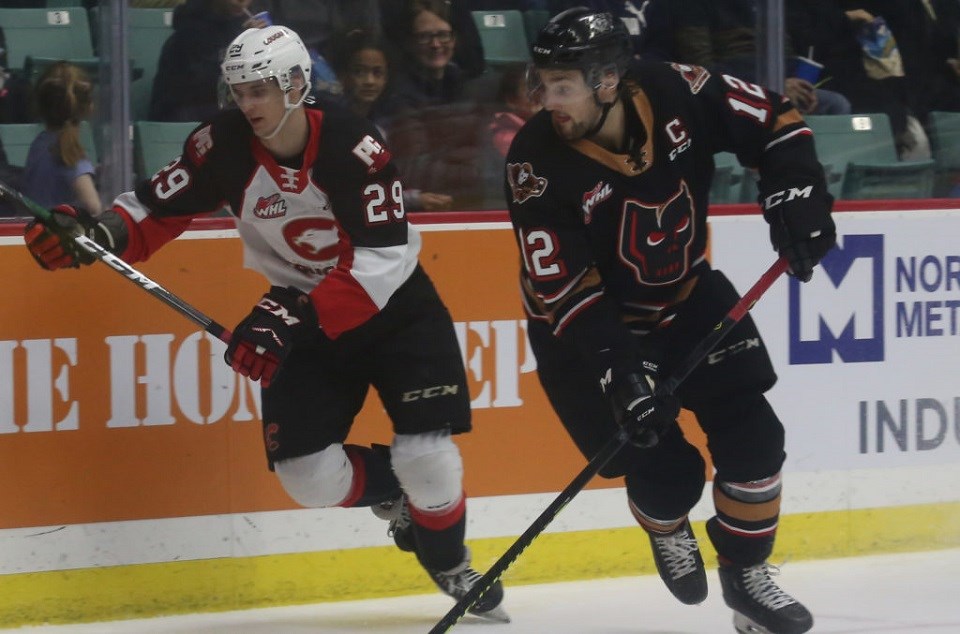 Taylor Gauthier’s chance to play against his hometown team on his 19th birthday was, unfortunately, short-lived.

The Prince George Cougars goaltender let in four goals on 17 shots from Calgary, including two within 42 seconds, before getting pulled 1:55 into the second period.

Tyler Brennan stopped all 14 shots in Gauthier’s replacement and his team followed with two goals of their own, but the deficit was too hard to make up, eventually ending in a 4-2 loss to the Hitmen.

Calgary capitalized 81 seconds into the contest to jump to the early lead and then doubled it to 2-0 exactly six minutes later.

Hitmen captain Mark Kastilec was sent to the box on a four-minute high-sticking penalty, but the Cats were left off the sheet for the remainder of the first period.

The visitors killed the last 13 seconds of Kastelic’s double-minor to start the second stanza before quickly scoring two more goals for a 4-0 cushion.

The Cougars’ offense turned the tide for the rest of the period, which included a goal from Filip Koffer at 5:54 for his seventh of the season.

In the final frame, Prince George got a six-minute power-play after Vancouver Canucks prospect Jett Woo was sent to the box for both high-sticking (2) and spearing (4).

Captain Josh Maser picked the man-advantage as a prime opportunity to score his team-leading 22nd goal of the year, with helpers from Cole Moberg and Ethan Browne, and cut the Hitmen lead to 4-2.

That’s all the home side could muster as time expired on McDonald’s Night.

The Cats’ record falls to 16-29-3-4 with 16 games left in the 2019-20 campaign; they also stay nine points back of the second wild-card spot after Seattle fell to Vancouver.

.@PGCougars announce Craig Jensen as the winner of the #McDonaldsNight Disneyland vacation worth $12,000 👏 This is one of the team’s largest-ever door prizes as the trip for 4 includes airfare, 6-night hotel stay & 5-day park hopper passes | #CityOfPG @PGMatters pic.twitter.com/B8JTTaXKSW

Prince George Cougars turn second-period collapse into comeback victory over Seattle
Feb 5, 2020 7:35 AM
Comments
We welcome your feedback and encourage you to share your thoughts on this story. We ask that you be respectful of others and their points of view, refrain from personal attacks and stay on topic. To learn about our commenting policies and how we moderate, please read our Community Guidelines.