The Cougars had won three straight heading into contests against the Americans
Oct 25, 2018 2:47 PM By: Jess Fedigan 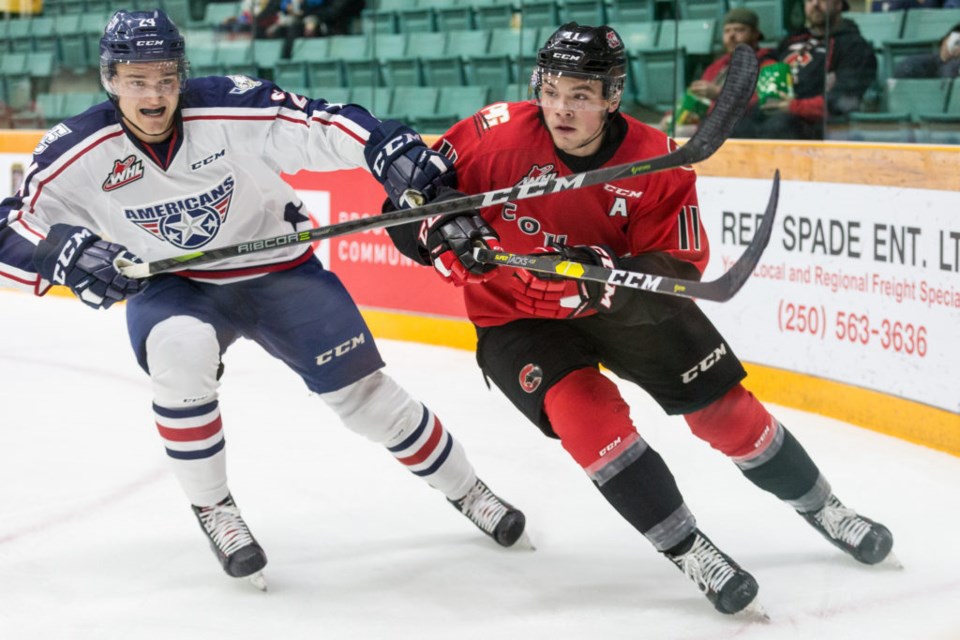 The Prince George Cougars struggled against the Tri-City Americans on Tuesday (Oct. 23) and Wednesday (Oct. 24), including blowing a 3-1 lead the club held going into the final frame in the second game.

But the first game of the home back-to-back was all Tri-City.

The Americans would score the opening goal at 13:58 of the first with a goal from Wil Kushniryk, but the Cougars would add an equalizer with just over two minutes left, courtesy of captain Josh Curtis scoring his fifth of the season. But it went downhill from there for Prince George.

Tri-City would add their second of the evening and game-winner at 3:52 of the second period with Brett Clayton finding the back of the net for the first time this season. In the third period, the floodgates opened.

Josh Curtis was named the third star of the game while Nolan Yaremko was the second star and Beck Warm earning first star.

But things would go from bad to worse for the Cougars on Wednesday night.

The saying,"It's not how you start, but how you finish" was proven to be true for both clubs.

Prince George got off to the right start, scoring two quick goals with Cole Moberg sniping his third of the season at 6:06 and Josh Maser adding his second of the year at 7:21 of the opening period.

The second would also see two goals scored between the two teams.

Nolan Yaremko added his ninth of the season on the power play to pull Tri-City within one, trailing 2-1. Rhett Rhinehart would pick up his first of the year also on the power play at 10:35 to put the Cougars back up by two goals.

Then things fell apart for Prince George in the third.

Parker AuCoin would add another power play goal for the Americans at 1:22 of the third to once again put Tri-City within one.

At 8:32, Krystof Hrablk would tally his third of the year to tie the game and the Cougars losing a 3-1 lead, which ended up sending the game to overtime where nothing was solved, so the two teams headed to a shootout.

Tri-City would shoot first on Cougars goalie Isaiah DiLaura. The first shooter he would face was Nolan Yaremko who would score for the Americans.

Ethan Browne would then have his turn against Tri-City goaltender Beck Warm, but would miss and give Tri-City the advantage.

Parker AuCoin was up next for the Americans but he would also miss, giving the Cougars some life with Vladislav Mikhalchuk set for Prince George.

But again, he would miss which meant if Isaac Johnson scored for Tri-City, that would be the game.

That's exactly what happened, giving the Americans the sweep of Prince George.

With the back-to-back losses, Prince George fell to 5-6-2 and have 12 points for the season while still sitting in third in the B.C. Division.

Next up for the Cougars is the Kelowna Rockets and new head coach and former NHL defenceman Adam Foote at Prospera Place on Saturday (Oct. 27) at 7:05 p.m.

Catch his Press Conference LIVE on our Facebook page at 11am! pic.twitter.com/Csc11f3PVr

The team then returns home for three straight against the Brandon Wheat Kings (Oct. 30) and Seattle Thunderbirds (Nov. 2 and 3).