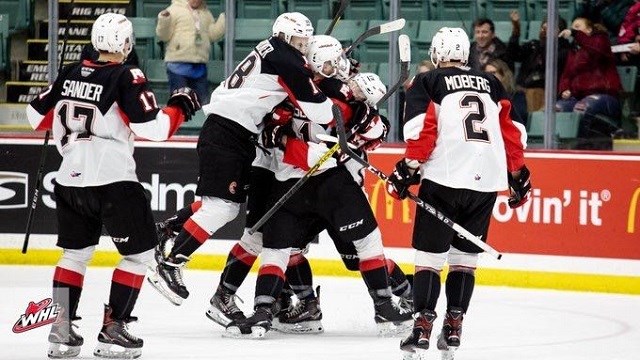 Mathematically speaking, the Cougars are still in the hunt for the 2019-20 Western Hockey League (WHL) playoffs.

Prince George made their case Sunday night (Feb. 23) against the team they’re chasing for the final wild-card spot in the western conference while snapping a five-game losing skid in the process.

Captain Josh Maser scored with 19 seconds left in overtime to grab the 2-1 win over Seattle and nabbing that crucial second point.

The win puts the Cats 12 points back of the Thunderbirds, however, they have three games at hand in the final stretch of the regular season.

The team also momentarily kept the Victoria Royals from clinching a playoff spot as a loss in any way by Prince George yesterday would’ve punched their ticket.

Taylor Gauthier got his (lucky) 13th victory of the year between the pipes by making 25 saves on 26 shots on the road, earning him the first-star honours for both the game and the league.

He stopped all eight shots in the opening frame, but so did Roddy Ross on the other side of the rink turned away all five shots he faced to keep it a scoreless contest through 20 minutes.

Vladislav Mikhalchuk broke the deadlock on a power-play to give the Cougars the 1-0 lead over 12 minutes into the second stanza.

The Belarussian fired a one-timer between Ross and the near post for his ninth goal of the 2019-20 campaign with helpers from Ryan Schoettler and Ethan Browne.

After the intermission break, Prince George was able to maintain its one-love advantage for two-thirds of the final period, but Seattle eventually found a way to end Gauthier’s potential shutout.

Jared Davidson caught the Cougars’ netminder sliding to his left a little more than he should’ve, shooting a one-timer of his own to tie it up at 1-1 with under six minutes left in regulation.

The final buzzer sounded and an extra five minutes were needed to settle the Sunday score.

Maser sent Prince George home on a high note after backhanding the puck and sneaking it underneath Ross’ arm for his first game-winning goal of the year.

Schoettler and Mikhalchuk each got their second point of the evening with assists on Maser’s marker in the 2-1 final.

The team returns home for a pair of midweek match-ups against the Kelowna Rockets Tuesday (Feb. 24) and Wednesday (Feb. 25).

Both tilts at the CN Centre start at 7 p.m.