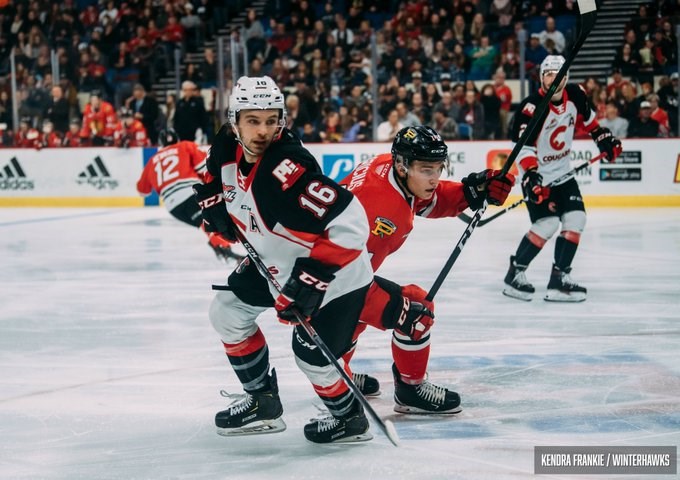 The Portland Winterhawks appeared to have simply overwhelmed the Prince George Cougars these past six days when it came to scoring at opportune times.

That was proven yesterday (Dec. 8) after the Cats settled for a 4-1 loss to the U.S. Division co-leaders, dropping the season series 0-4 and a fifth straight game.

Tyler Brennan got the call to start between the pipes for a seventh time this 2019-20 season, stopping 29 of 32 shots at Veterans Memorial Coliseum.

Joel Hofer will head to Canadian World Junior Team camp on a high note, making 26 saves on 27 shots Sunday evening; he started in all four games against Prince George for a combined 100 saves on 105 attempts and two shutouts.

The lone goal for the Cougars came off the stick of Captain Josh Maser once again.

The Houston, B.C. product’s team-leading 13th goal of the year gave Prince George some momentum after trailing 1-0 after the first period, scoring 97 seconds into the middle frame while on a power-play off passes from Cole Moberg and Ryan Schoettler.

Rounding out the Portland scoring was Johnny Ludvig, Jaydon Dureau and Seth Jarvis, who also earned six points against the Cats during the week-long season series.

The Cougars’ 20th loss of the season drops their record to 6-20-1-2 (15 points), only half the number of points the Vancouver Giants have in fourth place in the B.C. Division (30 points).

Prince George returns home looking for a pair of wins against the Victoria Royals this weekend, the final set of home games of the 2019 portion of their 68-game schedule.

Cats entertain the Royals on Friday (Dec. 13) and Saturday (Dec. 14) for Teddy and Toque Toss Night, with both tilts starting at 7 p.m.

Busy third period ultimately hurts Prince George Cougars in overtime loss to Portland
Dec 5, 2019 8:35 AM
Comments
We welcome your feedback and encourage you to share your thoughts on this story. We ask that you be respectful of others and their points of view, refrain from personal attacks and stay on topic. To learn about our commenting policies and how we moderate, please read our Community Guidelines.