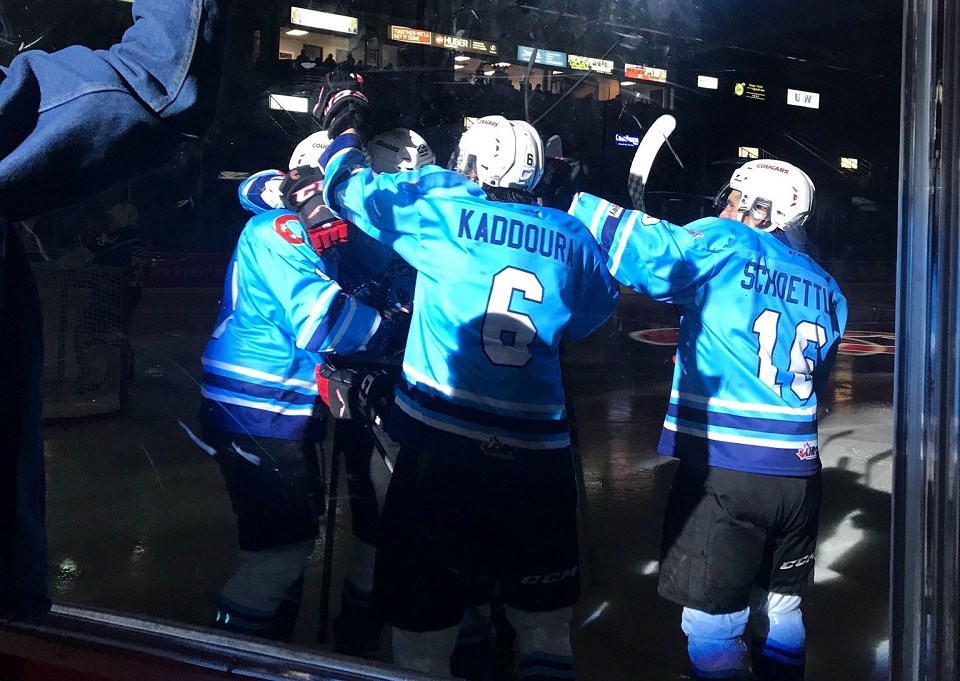 It was a good-looking win, literally and figuratively.

The Prince George Cougars prevailed 5-1 over the Tri-City Americans last night (Jan. 31), showing that they can capitalize on offense when the opportunity to score is presented to them.

The Cats had control of the puck for the majority of Friday’s contest at the CN Centre, outshooting their opponents 34-22 and giving goaltender Taylor Gauthier some much-needed help between the pipes.

Gauthier made 21 saves on 22 shots from Tri-City, who had the same number of points coming in as the Cougars sitting at the bottom of the U.S. Division.

This was Prince George’s second victory in a row, feeding off of last Saturday’s (Jan. 25) Vegas Night win over Kamloops and ended the month of January with a 5-4-1-1 record.

.@PGCougars dressed for success to claim a second straight game in a 5-1 victory over the Tri-City Americans 👔 Taylor Gauthier turned away 21 of 22 shots for his 10th win of the year, while the Cats’ had 5 different goal-scorers | #CityOfPG #WHLSuitsUp @PGMatters pic.twitter.com/15rdDRK2Cm

According to Western Hockey League (WHL) stats and schedule, that’s the first time this season the Cougars had a winning month.

Vladislav Mikhalchuk recorded his fourth multi-point game of the 2019-20 campaign with three points including a goal.

Ilijah Colina Tyson Upper and Cole Moberg were also sent to seventh heaven as each player scored his seventh goal of the season back-to-back-to-back.

The Americans did score first, however, to make it 1-0 in the early stages of the second period; the first 20 minutes saw nothing aside from one Cougar power-play.

Prince George captain Josh Maser then reached the 20-goal and 30-point plateaus a third straight season 10 minutes later by converting on a power-play.

The Houston, B.C. product grabbed assists from Moberg and Jack Sander and the two clubs were sent to the dressing rooms squared up at 1-1.

Upper followed suit 39 seconds later for the 3-1 insurance marker and, four minutes after that, Moberg fired a rocket from the blue-line to the top shelf on another power-play for the 4-1 lead.

Mikhalchuk sealed the deal by intercepting a pass in his own zone, speeding down ice, splitting the defencemen and sending the puck five-hole for an unassisted goal with 12 minutes left in regulation.

Before the final buzzer sounded, hostilities put Prince George in a five-on-three disadvantage but managed to kill it off and pose proudly for the 2,126 fans in attendance.

The win leaps the Cougars to a 14-25-3-4 and eight points back of the second wild-card playoff spot behind Seattle, who did not play last night.

Prince George wraps up its weekend doubleheader against the Americans tonight (Feb. 1), 7 p.m. from the CN Centre.

February is the team’s busiest month for home games with eight and 13 in total.

Prince George Cougars tie the knot on weekend split with big win over Kamloops
Jan 26, 2020 7:35 AM