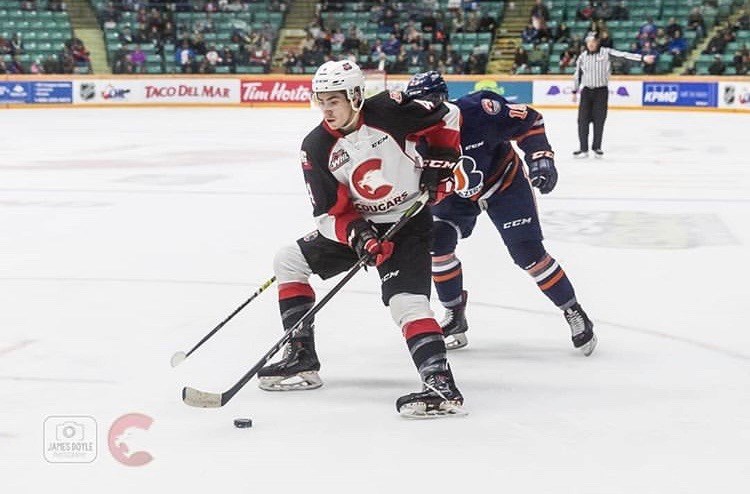 That’s how many games the Prince George Cougars have lost on home ice to the Kamloops Blazers following a 3-2 overtime decision Sunday afternoon.

The last time the Cats defeated their BC Division rivals at the CN Centre was Mar. 4, 2017.

This season, no matter what happens, Kamloops will win the nine-game series against Prince George, with the current record sitting 5-0 between the two clubs.

Goaltender Taylor Gauthier made his eighth consecutive start for the Cougars in (arguably) one of his top performances of the new year despite the third-straight setback.

The 17-year-old made three key saves in the first period of Sunday’s contest that kept the home team in play; he finished with 40 saves on 43 shots.

After a scoreless first frame, Houston, B.C. native Josh Maser potted his team-leading 18th goal of the year to put Prince George on the board in the second, with helpers from Ethan Browne and Jackson Leppard.

Kamloops followed with a tying goal 26 seconds later, but the Cougars regained the one-goal lead with four minutes left in the period, courtesy of Czech Republic import Matej Toman for his fifth of the season.

The Blazers waited until the 8:38 mark of the third period to tie it up again at 2-2, eventually netting the game-winning goal with 50 seconds left in overtime.

The loss drops Prince George to the bottom of the Western Hockey League’s (WHL) Western Conference with a record to 16-24-2-2.

However, with the one point, the Cougars are one point back of a wild-card spot in the playoffs behind Kamloops and Seattle.

Isaiah DiLaura will get his start between the pipes for the Cats this week for the first time since Dec. 29 as Gauthier is hopping on a plane to Red Deer for the 2019 CHL/NHL Prospects Game on Wednesday.

Prince George takes on the Moose Jaw Warriors tomorrow (Tuesday), 7 p.m. at the CN Centre to conclude a six-game homestand.

Raiders roll over Cougars in third-period outbreak
Jan 17, 2019 9:35 AM
Comments
We welcome your feedback and encourage you to share your thoughts on this story. We ask that you be respectful of others and their points of view, refrain from personal attacks and stay on topic. To learn about our commenting policies and how we moderate, please read our Community Guidelines.