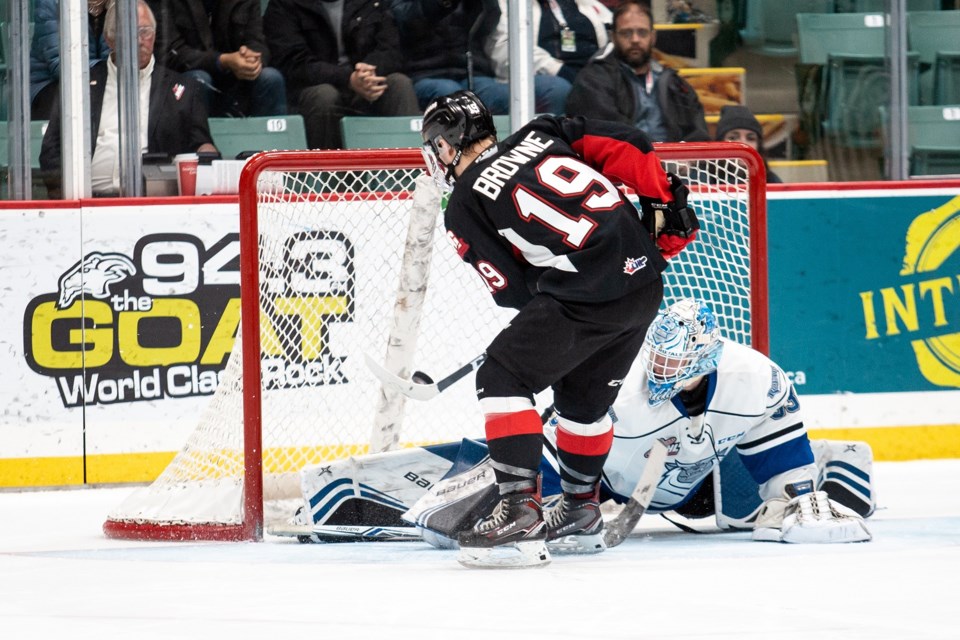 If you left the CN Centre Friday night (Nov. 8) with 3:49 left in the third period, you missed some great hockey on the part of the Prince George Cougars.

After falling 2-0 with minutes left in regulation, the Cats got gritty and hungry quickly and showed calm, cool teamwork that led to two goals within 102 seconds of each other to tie their contest with Victoria at 2-2.

They got to the overtime period, salvaging a point for the Western Hockey League (WHL) standings, and eventually the shootout, but despite the visiting Royals coming out on top with the 3-2 victory, one could argue this was one of the Cougars’ better games in recent memory.

In a game that included a controversial goal and adversity through the remainder of the frame, Prince George showed composure and patience in understanding the circumstances, which ultimately led to smart, high-octane offense at a critical time and against a rival that has had their number in the 2019-20 season thus far.

Taylor Gauthier appeared to be in mid-season form last night in goal for the Cougars, answering 24 shots with 22 saves that included four in the extra frame to keep his team alive.

The first two periods saw no activity on the scoresheet, but Prince George exploded on offense in the opener with 12 shots towards Royals’ netminder Brock Gould.

Victoria got on the board first 1-0 over four minutes into the third, but was met with jeers from the crowd and a once-in-a-full-moon outburst from Cats’ General Manager and Head Coach Mark Lamb.

The bench was arguing for an offside call well before Kaid Oliver put the puck behind Gauthier as a replay on the CN Centre jumbotron appeared to show the puck crossing the blue line by centimetres, but the goal would stand by the officials.

Victoria answered with a potential insurance marker at 16:11 of the frame, but that’s when the Cougars kicked their skates into another gear.

After pulling Gauthier with about three minutes to go, Captain Josh Maser was fed by Filip Koffer from the far boards to pot his team-leading seventh goal of the year and provide a shimmering light of hope in the dying moments of the game.

Connor Bowie pounced on an opportunity while also on a six-on-five to tie it at 2-2 with 49 seconds left; Cole Moberg and Ryan Schoettler got the helpers on his second goal of 2019-20.

A point was given to both teams going into overtime, which solved nothing and led to a shootout.

Ethan Browne got things started by stickhandling all the way down to Gould and lifting the puck over his right side for the first goal in the contest.

Gauthier followed suit with a pair of saves, but Prince George’s Moberg and Maser couldn’t score, which led to a 1-1 tie with a Royals goal by Oliver.

Koffer shot fourth and couldn’t solve Gould, but Tarun Fizer found a way to beat Gauthier and give the 3-2 triumph to his Victoria teammates.

This was the second meeting in a row between these two teams that ended in a 3-2 score from a shootout as the Royals won the same way in their arena on Sept. 28.

The Cougars’ record now sits 4-12-0-2 for 10 points and are three-and-a-half games behind Victoria in the B.C. Division standings.

Prince George wraps up its three-game homestand tonight (Nov. 9), 7 p.m., the second of a weekend doubleheader against Victoria, and will host several local first responders, military members and veterans for Heroes Night.

Prince George Cougars back on winning side with last-minute overtime victory in Vancouver
Oct 28, 2019 7:30 AM
Comments
We welcome your feedback and encourage you to share your thoughts on this story. We ask that you be respectful of others and their points of view, refrain from personal attacks and stay on topic. To learn about our commenting policies and how we moderate, please read our Community Guidelines.