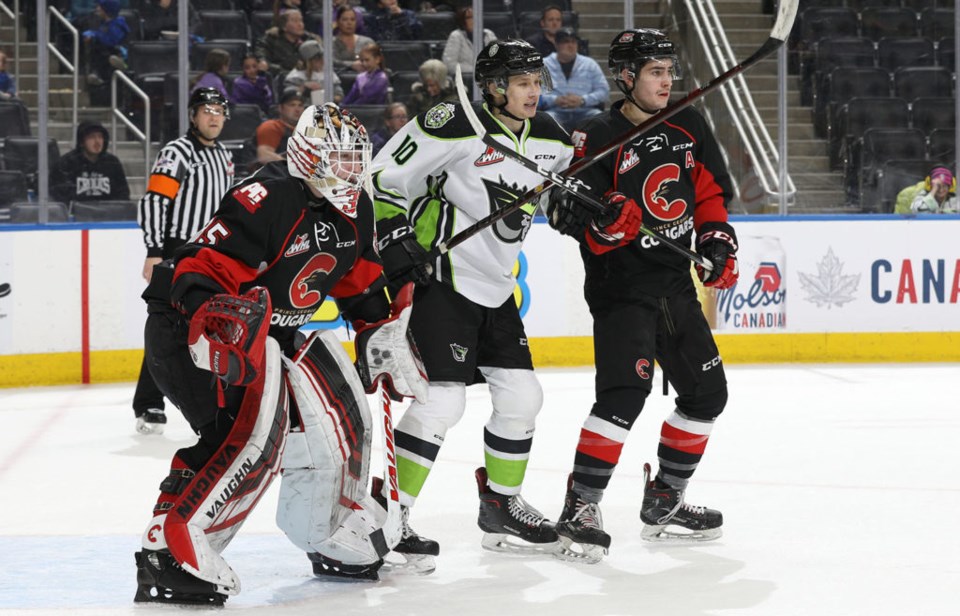 Taylor Gauthier (#35) and Joel Lakusta (#4) try to fight off an Edmonton Oil King in front of their net while on a road game at Rogers Place. (via Edmonton Oil Kings/Marko Ditkun Photography)

A glimmer of hope in finding an early path to the NHL may still be in store for Taylor Gauthier.

The Prince George Cougars netminder has been invited to attend development camp for the Boston Bruins according to a team release yesterday (June 25).

The 18-year-old went undrafted this year after four Western Hockey League (WHL) goaltenders had their name called in Vancouver on the weekend.

He is one of five in his position that will train in Boston during the three-day camp, and one of two coming on an invitational basis.

The remaining three goalies are already part of the Bruins organization.

#NHLBruins announce 2019 Development Camp roster and schedule; all on-ice sessions @WarriorIceArena are free and open to the public: https://t.co/o6ZS9sz33N

Since getting passed over, Gauthier has taken to social media claiming he’s not down and out.

“What a whirlwind weekend,” reads a Twitter post. “Thank you to everyone who has supported me over the last couple days. It hasn’t gone unnoticed, this has ignited a fire that hasn’t been lit before. I’ll be back better than ever. Looking forward to proving everyone wrong with the Prince George Cougars this season.”

In an Instagram photo, Gauthier simply says 'I’ll be back,' showing off a mental toughness he says he continues to work on each day.

“I’ve dealt with lots of adversity over the last two years," said Gauthier in an earlier interview with PrinceGeorgeMatters. "You know, in Prince George, we weren’t really the best in the [Western Hockey] League, but I think I have a good head on my shoulders and I’m pretty mentally tough. So I think I’m able to handle adversity maybe a little bit better than the other guys at the camp. I’ll let that take care of itself though and enjoy my time there.”

The Calgary product was ranked seventh among North American netminders going into this year’s draft and also had the best squat jump (23.19 metres) at the NHL Scouting Combine in Buffalo.

Gauthier has represented Canada on the international stage since the end of the 2018-19 WHL season, donning the maple leaf in Sweden at the World Under-18 Championships, where he finished fourth despite a winning record of 3-1.