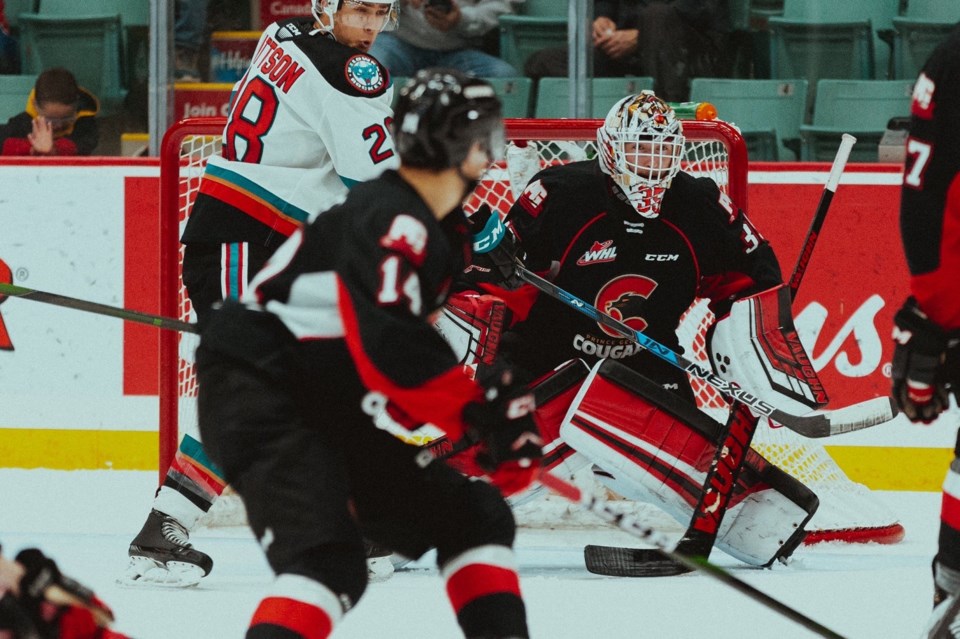 The Prince George Cougars were looking for a season first last night (Nov. 30) with an opportunity to win a third straight game, but their opponents had other plans.

The Cats fell early on the road Saturday and after making the effort to tie it up with one period left to play, the Kelowna Rockets managed to beat Taylor Gauthier once more to seal a 3-2 victory on Teddy Bear Toss Night at Prospera Place.

Prince George’s two-game winning streak ends with a ninth one-goal loss through the first 25 tilts of the 2019-20 season and a fourth loss in five games against their B.C. Division rivals.

Gauthier finished with 23 saves on 26 shots in his 20th start of the year, two goals of which came on Kelowna power-plays and both by Nolan Foote, son of Rockets Head Coach Adam Foote.

The 19-year-old connected on special teams from linemates Kaeden Korczak and Jadon Joseph on both occasions, aiding Kelowna to its fifth win in the last six games.

Foote’s first marker came 11:26 into the opening period, sending teddy bears and winter clothes onto the ice, and it would remain a 1-0 score through 20 minutes.

The Rockets pulled to a two-goal advantage just 62 seconds into the middle frame, but Prince George was able to find another gear later on.

Cougars Captain Josh Maser tipped in a feed in front by Ethan Browne and Ryan Schoettler for his team-leading 11th goal to cut the lead to 2-1.

Nearly three minutes later, Connor Bowie capitalized on a rebound off Roman Basran’s left pad for his third goal in three games to tie it up at 2-2 and keep Prince George in the hunt for a win.

Mitch Kohner took the initial shot to force the rebound; he and Craig Armstrong were credited with the assists on Bowie’s fifth of the season.

Foote’s second goal of the night came 7:41 into the third period once again on a power-play after Cougars’ rookie Ethan Samson took a delay-of-game penalty, but, despite pulling Gauthier with 42 seconds left, time ran out and 3-2 was the final.

They come back home for a mid-week doubleheader against the Portland Winterhawks Tuesday (Dec. 3) and Wednesday (Dec. 4).

Puck drop both nights goes for 7 p.m. at the CN Centre.

Prince George Cougars’ wedding ceremony during Vegas-themed game to be ‘first in Canadian hockey’
Nov 29, 2019 12:10 PM
Comments
We welcome your feedback and encourage you to share your thoughts on this story. We ask that you be respectful of others and their points of view, refrain from personal attacks and stay on topic. To learn about our commenting policies and how we moderate, please read our Community Guidelines.