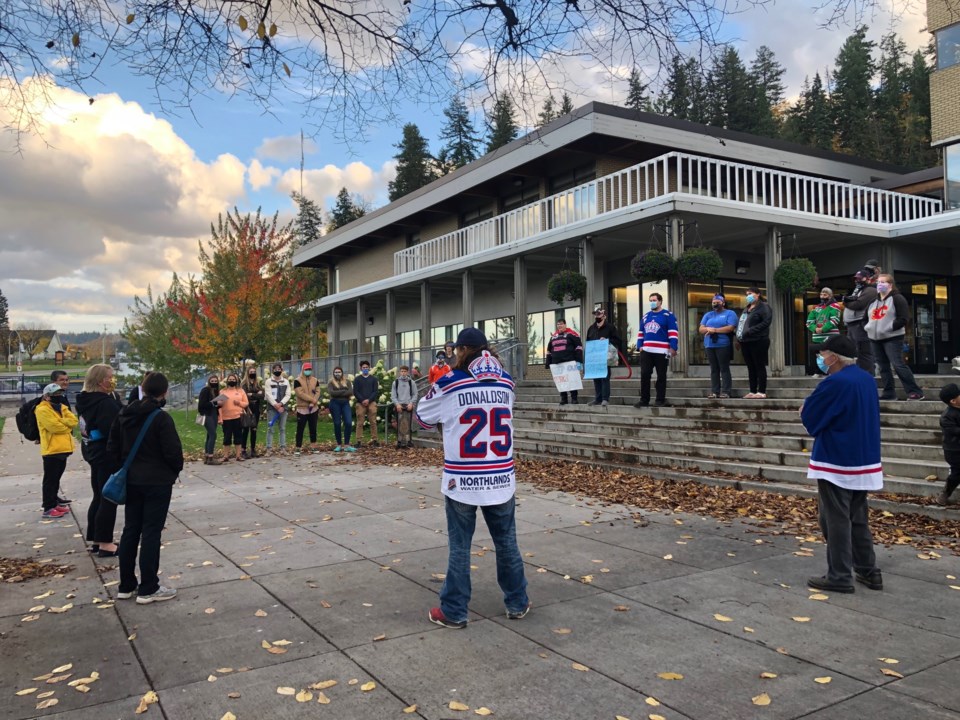 A group of Spruce Kings supporters gathered on the steps of city hall before the Oct. 5 council meeting where council was to vote on reopening arenas. (via Hanna Petersen)

The future of the Prince George Spruce Kings has been secured after city council voted to reopen the ice sheets at both the Rolling Mix Concrete Arena (RMCA) and the CN Centre for user groups this season.

The 49-year-old BCHL team expressed doubts about its future in the city if it could not go forward with its season utilizing the RMCA for games, practices and as a source of advertising revenue.

A group of dedicated fans, supporters and Spruce Kings volunteers gathered on the steps of city hall before tonight’s meeting (Oct. 5) where the team’s business manager Kyle Anderson was set to address council before the question of reopening arenas came to a vote.

“The Prince George Spruce Kings doesn’t only give us dedication on the ice but they bring community spirit,” said avid fan and volunteer Wesley Mitchell, who was there to offer team support.

“The Spruce Kings are very important and junior hockey in Prince George is history and we don’t want that history gone.”

Group of Spruce Kings supporters gathered outside city hall ahead of tonight’s council meeting. The team wants the RMCA to be reopened @pgmatters #cityofpg pic.twitter.com/KPYplcR9fm

The Spruce Kings requested that the RMCA be available to them for a minimum one-to-three days prior to their first exhibition game facing Merritt on Oct. 25 for practices.

“The Spruce Kings are currently negotiating partnerships with businesses for advertising space in viewable areas of the Online Broadcast of all BCHL games,” explained Anderson in his presentation to council.

“The total value of these ads is $125,000. Without this revenue, the Spruce Kings season is in serious jeopardy.”

He said if the Spruce Kings were forced out of the RMCA it is likely that the team would cease to operate this season. Beyond this season, it is highly unlikely that the organization could recover financially and would be forced to cease operations permanently.

“Should the nearly 50 tenure of the Spruce Kings in the city of Prince George come to an end there will be no chance of junior hockey returning to the city,” said Anderson.

Reopening the RMCA ice surface for the 2020-21 winter season, from mid-October to mid-April, would cost approximately $250,000.

The ice sheets at the CN Centre were identified as most cost-effective to reopen because Exhibition Park can share utilities and staffing with the Kin Arenas, but the walking program which, because of COVID-19 restrictions would now need staffing, IT support and cleaning resources would cost $150,000 to run for the seven-month season.

Although councillors brought up the idea of the Spruce Kings and the Prince George Cougars sharing the same ice-sheet for the next seven months, Anderson noted the BCHL and WHL are competitors and the leagues wouldn’t support sharing the same on-ice branding.

Adam Davey, director of community services, also said scheduling between the teams at CN Centre and finding a method to swap out hockey boards for each team before mid-October wouldn’t be feasible.

Anderson said the $125,000 generated from the RMCA board advertising sales is critical to the Spruce Kings and emphasized the team has no other option than the RCMA to meet its financial needs.

“I think the important message coming out of the conversation today is the long-term planning piece,” said Coun. Kyle Sampson.

“We have a 62-year-old building that is going to fail in the next however many years and I am concerned that the only option is to stay in the RMCA. We need to open up our conversations and try and find a way that it is not the only option. I don’t think anyone around our table wants to see that organization fold because of the arena.”

The Spruce Kings aren’t the only user group who would benefit from the reopening of the RMCA, which many councillors also noted.

Davey reported that every major user group in the city has requested additional ice time and the ice use forecast is assessed at a level similar to previous years.

"We are talking about an additional $400,000 to our budget," says Coun. Terri McConnachie. "There's all different areas of our city that need to be taken care of at the same time.”

Staff also noted the city’s subsidization rate is somewhere around 80 to 85 per cent for civic facilities.

"We have been used to 45 per cent subsidization rates for many years in this city. But we are taking it to a new level and I guess we will see what happens during our budget conversations,” said Mayor Lyn Hall.

"You can see tonight the turmoil and the angst with many of us as we start to talk about the changing sands of the pandemic and what it means to our community and how we get through this thing."

“All of the user groups are important. Opening the facilities is the right thing to do but I like many others are concerned about what that means to our budget,” said Krause before the vote.

“We need to remind ourselves that many of the taxpayers out there are struggling too.”

The ice sheets at the RMCA and CN Centre, as well as its walking program, should now be open by mid-to-late October.

Helmet decals to honour fallen former Prince George Spruce Kings' captain during 2020-21 season
Sep 30, 2020 8:35 AM
Comments
We welcome your feedback and encourage you to share your thoughts. We ask that you be respectful of others and their points of view, refrain from personal attacks and stay on topic. To learn about our commenting policies and how we moderate, please read our Community Guidelines.