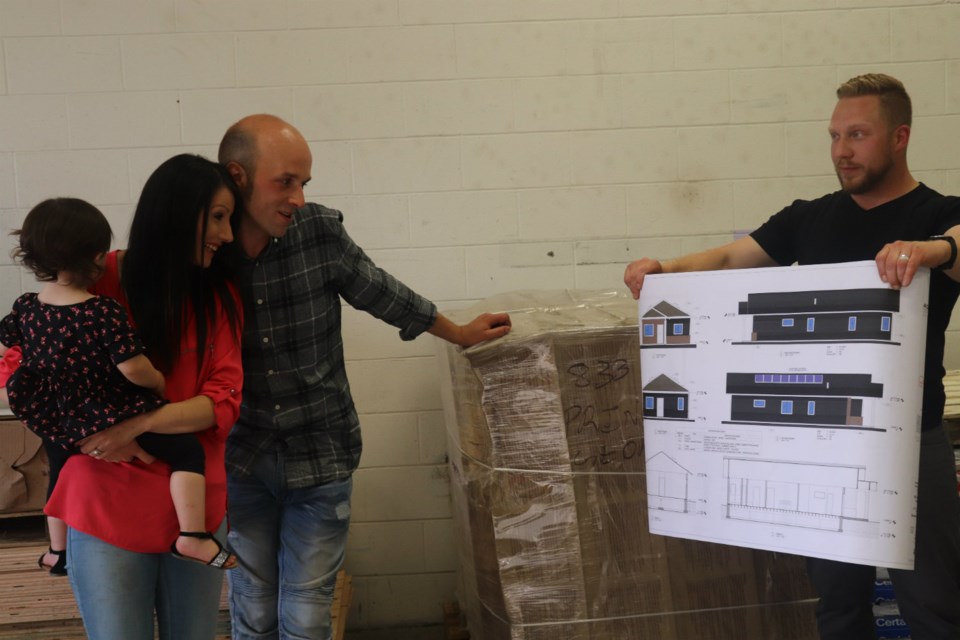 Chris and Amanda Sopel take their first look at the plans for their free house as the winners of the Welcome Home, Pay It Forward initiative (via Kyle Balzer)

One deserving Prince George family is about to get a brand new home, and the city is now helping to cover some of the costs.

Foundations of Hope Community Builders Society, attended city council last night (Sept. 9) to ask for help with the Welcome Home, Pay It Forward Project that will see the Sopel family get a new house on Carney Street.

“This whole thing has deep roots,” said Josh Eiswerth, first director of the society and owner of Ridgeline Roofing, who is heading the project with about 20 other organizations. “It’s one of the hardest things in the world to do is run a business and if you are just going to do that to make money - it ain’t worth it.”

Eiswerth explained to council that when he started Ridgeline Roofing, they started developing initiatives to donate roofs to people in need, and have even donated five roofs this year.

“There were honestly some submissions for roofs for people where we couldn’t do their roofs because the house was already rotten and that is devastating.”

He said that’s where the idea for the project came from, to not just give a roof to a family but a whole house.

“This is why I love this community and this city so much because we weren’t even asking and people were already starting to push the agenda on something much bigger than just giving away a roof.”

The Sopel family were announced as recipients of the home back on Sept. 28, 2018 during the Prince George Cougars' home opener at the CN Centre.

“They are a family who really tired, again and again, to get ahead in life and no matter what they did, what turn they took they just hit a roadblock,” said Eiswerth.

Now the society is ready to break ground, but need to pay city costs associated with servicing the land.

“We got an unbelievable response from the trades,” said Eisworth, adding that they’ve had about 90 per cent of materials and labour donated from local trades companies. “That being said there are some things that trades just can’t donate.”

The high-efficiency home will be constructed at 695 Carney Street and be valued at about $350,000.

“The gift of a home is incredible and taking the lead on a project like this is an enormous amount of work and it’s a risk with rising costs of constructions,” said Coun. Terri McConnachie. “I think this is a very valuable project to support.”

She then made the motion to support the society’s entire ask of $20,900 with the funds coming from the Council Contingency Fund.

The motion was then unanimously approved by council.

PHOTOS: Kelly Stearn of Prince George wins 2019 Spruce Kings Show Home
May 3, 2019 4:21 PM
Comments
We welcome your feedback and encourage you to share your thoughts on this story. We ask that you be respectful of others and their points of view, refrain from personal attacks and stay on topic. To learn about our commenting policies and how we moderate, please read our Community Guidelines.