32 elementary schools will be participating in their own version of Tough Mudder
0
Jun 9, 2019 1:34 PM By: Hanna Petersen Students from throughout the School District No. 57 (SD57) will challenge themselves to conquer a physically challenging obstacle course in the upcoming fourth annual Little Mudder Challenge.

“Students love it, staff love it,” says John Giannisis, who works in SD57's Aboriginal Education Department, in a press release.

He says the event is a challenge and not a race, so there’s no need for keeping track of finishing times.

“This is to challenge yourself and to challenge a team. We actually say in our pledge that there is no first place,” says Giannisis. 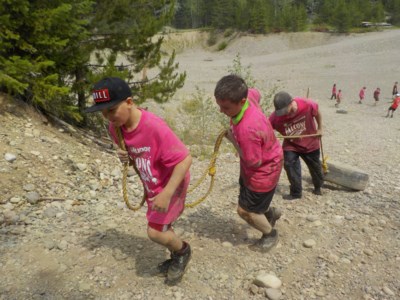 Participants will be put to the test on a 5.7 km obstacle course that includes a large, net-covered mud pit they have to crawl through, climbing walls and balance beams.

“Students help each other,” Giannisis says, adding that in a previous Little Mudder, “One girl didn’t want to go through the mud challenge so her whole school held up the net for her so she could walk — she didn’t have to crawl. You see that stuff over and over.”

The Little Mudder concept started with Giannisis, who did his first Tough Mudder in 2013 in Whistler.

“You do them with three, four, eight people so it really helps you build relationships and I really wanted to bring that to the students because I know what it did for me and how it made me feel,” he says.

“So when I came into this department – I used to be a Community School Coordinator – this was one of my pitches, saying, ‘Hey, I’d like to start a Little Mudder.’ The first year was our trial and we’ve been going from there.”

He says the students and staff who register for the event usually start training in April, with a recommended two to three hours of workouts a week.

This year, every elementary school in the district – 32 in total – will have a team in the Little Mudder. That includes schools in Mackenzie, McBride and Valemount which is a three-hour drive from Prince George.

“Students just love the whole day,” says Cheri Dehnke, an Aboriginal Education Worker at Valemount Elementary in the release. “They get to come to Prince George, they get to participate.”

She says the younger students have heard stories about how much fun it was from the older students who’ve previously participated.

Each school is offered spots for 30 participants. The Little Mudder starts at about 9 a.m. and ends at about 3 p.m. on all three days.

Participating groups will arrive at different times, with three to four schools on the course at any one time.