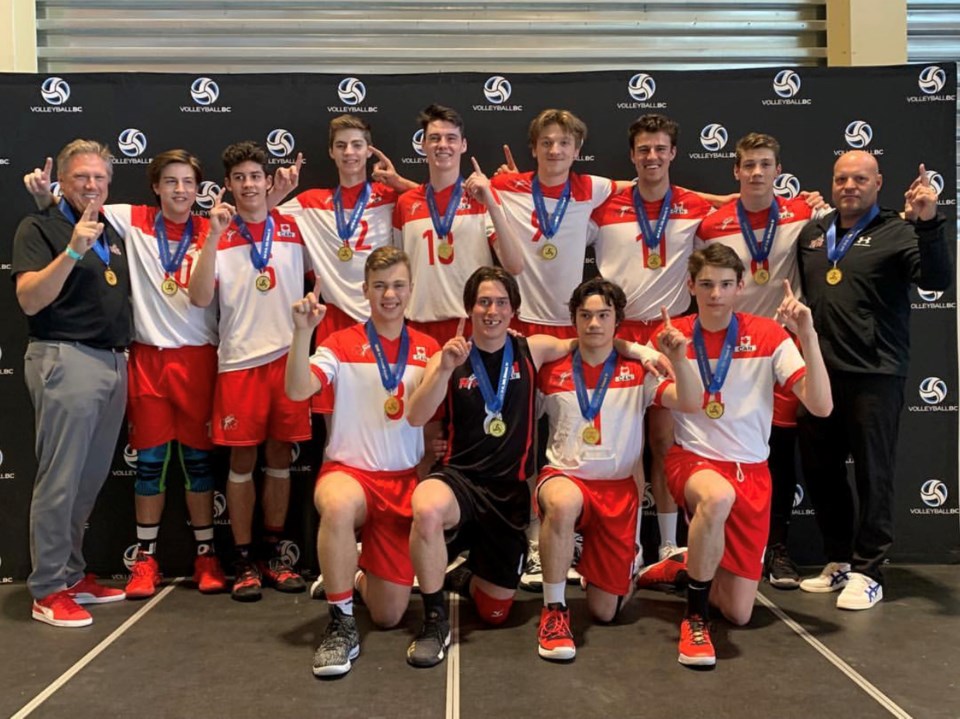 Prince George Kodiaks are the 2019 Volleyball B.C. club champions in the Under-18 boys division. (via Instagram/PGYVC)

That was the momentum carried out by the Prince George Kodiaks this past weekend, who finished undefeated at the Volleyball B.C. provincial championships in Richmond to claim the club gold medal for the first time in their history.

The 12 young men accomplished this in convincing fashion by winning 14 consecutive sets and never surrendering a lead of fewer than three points, much to the delight of Assistant Head Coach Hans Minck.

He explains the closeness of the players is what helped them get to the top of the podium.

“That was our winning formula,” Minck told PrinceGeorgeMatters. “These guys knew each other and played with each other for a very long time. They go to school together, they’re at each other’s houses playing beach volleyball in the summer; I believe it’s just the comradery because we had a calm about us where we never felt nervous at all in any game. It was one of those weekends where everything was just falling into place.”

Prince George defeated the Seaside Six Pack (White Rock) 2-0 in the best-of-three gold medal match, winning by scores of 25-22 and 25-19.

The Kodiaks were ranked fifth going into the 12-team championship, finished the preliminary round at the top of their pool before playoffs, but they also had to play a cross-over match before getting to the quarter-finals.

Minck explains this was because the top four teams ranked going into provincials got an automatic spot in the playoff round.

“Don’t get me wrong, every team at provincials were high-calibre, but again, our guys never held up,” he said. “They played their hearts out and they skated right on through. We knew what they were capable of, and I think they didn’t really believe they could accomplish what they could until it all started to fall into place this weekend. I don’t know if we got into their heads as well because I had a few parents from opposing teams say they didn’t want to play us. That was kind of funny to hear, but it also spoke to the talent of our team too.”

Minck added that this particular Kodiaks roster has been together for a long time.

They even bumped their way to the gold medal match two years ago at the Under-16 Western Canadian Championship, in which they lost to settle for the silver.

With some players now moving on to play university volleyball, Minck believes their success is based on dedication.

“Prince George pumps out really good athletes and sometimes, we don't get our just dues when we go out to play. The thing is, we don’t have any home games in a given season; we have to go south to play other teams. Nobody comes up here to play us. So the fact that we have to travel and play all these dynasty clubs in Kelowna, Abbotsford, Seaside, and whoever else, it really speaks to how much our players really wanted to win.”

The first B.C. title didn’t come easy for Prince George as Minck explains they’ve felt the agony of defeat in previous years, but it was the resilient minds of the young athletes that kept them believing.

“We’ve been in situations when we’re in the semi-finals and lose by one of two points in the third set and then we’re heartbroken. We’ve lost in a gold medal game where the ball hit the net or there was a misfire on a play, that kind of thing, but we're risen up because we’ve been a group for so long. We know each other, we trust each other, we have each other’s back; there’s no internal fighting.”

Prince George is now off to the National Club Volleyball Championships in Toronto, according to the team’s website, taking place May 9 to 11.

The full roster for the 2019 Volleyball B.C. Under-18 club-champion Kodiaks are as follows: