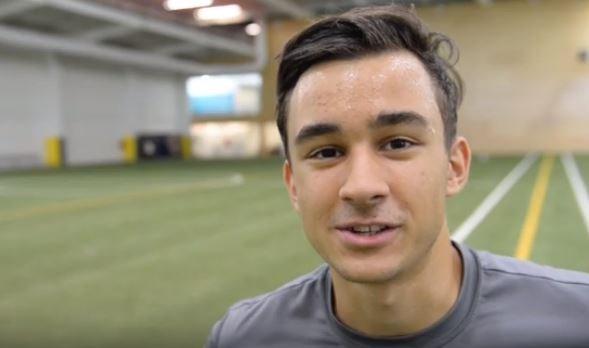 17-year-old Julian Daduica will be joining the Timberwolves for the 2019-2020 Canada West season. (via Youtube/UNBC)

Prince George's Julian Daduica will be joining the team for the 2019-20 Canada West season.

“The UNBC jersey will definitely feel great to put on. I have grown up watching them since I was a young kid. As soon as I started watching them, I always knew I wanted to play here. It is going to be a fun first year. A great group of guys and I am ready to play. The emotions are getting to me, but I am just excited to play on the ball,” says Daduica in a news release.

The 17-year-old joined the Timberwolves for a number of training sessions at the Northern Sport Centre throughout the spring. He says the chance to work with Timberwolves coach Steve Simonson played a major factor in his decision to commit to UNBC.

“It’s a really great opportunity. Steve is the best coach I have had, by far. Technically, he is great. I love his play style. How he loves to dominate every area of the game through possession of the ball.”

Those training sessions allowed the Prince George Youth Soccer Association product a glimpse of the physicality and speed of Canada West soccer, notes the release.

Daduica says he is hopeful it allows for a smooth transition, one that will be aided by the familiarity with his new teammates.

“It has really helped, physically and mentally, to get prepared for this season. The times I did practice really helped develop my touch and my control, as well as a good relationship with the guys.”

Daduica is a member of the PGYSA Impact U18 team that earned a bronze medal at the recent B.C. Soccer Provincials. He hopes to slot in at right-back for the Timberwolves; the same spot he patrolled for the U18 team, where he was dynamic at the defensive and offensive ends of the pitch for a team led by UNBC assistant coach Rob Lewis.

Simonson has had his eye on Daduica for some time and cites his newest recruit’s motor and willingness to battle as attributes that will help the Timberwolves for years to come.

“He is an aggressive and dynamic player with a tremendous engine that allows him to get up and down the park. He is versatile so we are able to use him in a variety of roles as needed,” says Simpson in the release.

“Julian is a Prince George product, so he has chemistry with many of our players already. We are excited to have someone of his quality, coming to us from right in our back yard.”

A 2019 graduate of Duchess Park, Daduica was on the principal’s list for his academic achievements. He will enroll in biochemistry, with aspirations of becoming a doctor.

Northern Health adds another 11 COVID-19 cases, B.C. records 96
Sep 22, 2020 3:35 PM
Comments
We welcome your feedback and encourage you to share your thoughts. We ask that you be respectful of others and their points of view, refrain from personal attacks and stay on topic. To learn about our commenting policies and how we moderate, please read our Community Guidelines.