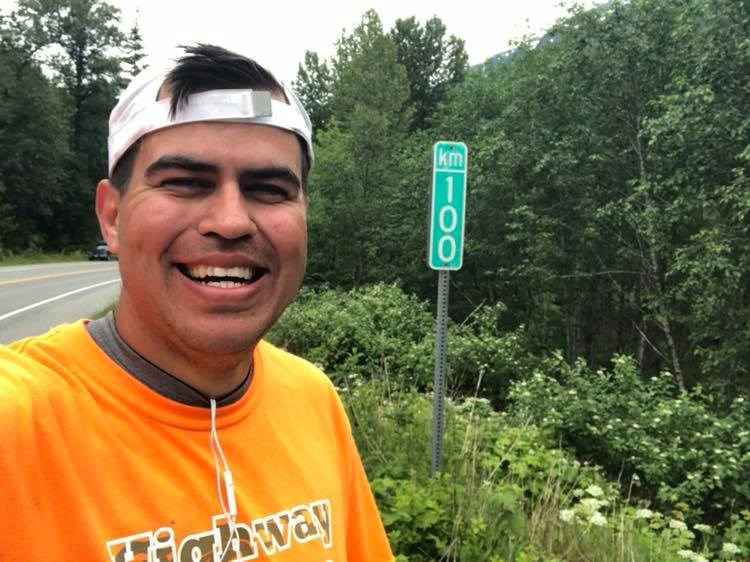 A Prince George man is back home and resting his feet after running over 700 km in the name of hope.

On May 15, Adam Prytula set out to run the distance between Prince George and Prince Rupert along Highway 16, which is known as the Highway of Tears.

“Why I wanted to do it is because I live and I work along the highway and I see there’s a lot of tears and pain and history for many of us,” the former Kamloops resident tells PrinceGeorgeMatters. “I wanted to help shift people’s thinking and discussion around where we are going as people, communities, and nations and that our future is bright and full of hope and the hard times that we are going through will end.” 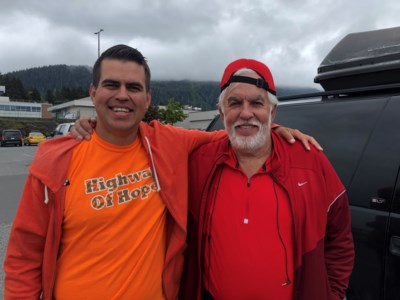 Adam Prytula's dad was his support system during the 20-day run. (via Adam Prytula)
Prytula called his journey the Highway of Hope Run. “It was really tough,” Prytula says of his journey. “I was pushing my boundaries each day and it was also very painful. My feet and my knees, they hurt a lot. By the end, I could see bruises on the inside of my feet. They were all swollen.”

Prytrula trained for a year before setting out on the run, which took him 20 days to complete.

He finished on June 4 and returned to Prince George a few days later.

“Every time I was thinking about myself and the pain I was going through and how hard it was for me, I felt like quitting,” explains Prytula. “But when I changed my focus to other people and how this could help and benefit other people, it helped me to push through.”

He says the support he received throughout the run was very grassroots, with individuals coming out to cheer him on. He also spoke about his journey with different youth groups in communities along the way.

“My goal was to plant the seed in people’s hearts and minds. One of the things that I talked about in my talk with the youth groups was to appreciate people around you. Appreciate the good around you.”

Prytula also had his dad's support. He acted as his son's crew, dropping Prytula off at his checkpoint on the road each morning.

“I’d usually meet him halfway through the day to restock food and water and then run for some more and then I’d meet him at the end of the day.”

On the last day of his journey before he finally reached Prince Rupert, Prytula ran 81 km. He says reaching his final destination was bittersweet.

“I was hurting a lot so that was the bitter part and the sweet part was that it was all finished.”

“I definitely learned that I can do more than I thought I could because each day, once I reached my limit, I was able to push past it,” he adds. “Our future is bright, it’s full of hope and whatever pain and hardship we are going through right now will end, and the pain is only temporary.”