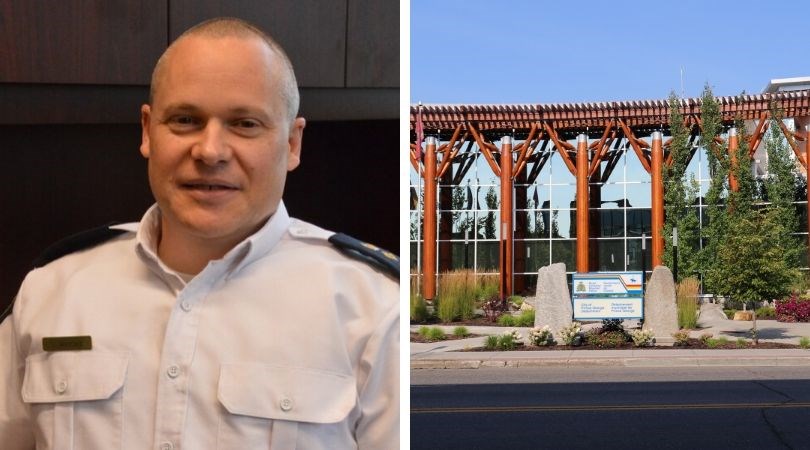 Although its file count was slightly down from last year, the COVID-19 pandemic meant 2020 was another busy year for Prince George RCMP.

He says this is due to crown counsel policy implemented over the last two years in which persons who are in breach of court orders are not held in custody prior to their appearance, but instead released with paperwork on a promise to appear.

"Despite the fact that our prisoners dropped noticeably our charges forward to crown council dipped only slightly," explained Wright.

"I think we will see this trend continue due to changes in the criminal code due to how breaching court orders are handled."

“COVID-19 has impacted everything. It has impacted us as well,” says Wright noting that when businesses were closed in March, it led to a decrease in shoplifters.

“Typically, shoplifters are persons in breach of court orders or outstanding warrants so they would be people in our cell blocks, so that was reduced as well.”

The city's top cop said break-and-enters were also down as businesses were closed and many people stayed home.

“It really changed behaviours not just for the shoppers but for the criminal element as well.”

Policing in the downtown core

Wright also highlighted the work of the Downtown Safety Unit in 2020.

“We rely on them to be very engaged down there. This year we have executed several drug and property search warrants. The most recent one here on 11th Avenue, a few days ago, where there were 19 persons, several firearms and other items seized.”

He says the Downtown Safety Unit, with support from city council’s service enhancement package, has been implementing foot patrols with downtown bylaw officers.

“The partnership with bylaws over the last year from our perspective has been very effective and useful. I really appreciate having them around and available and I think it’s a good relationship that works well.”

Wright also said the city is ‘on the cusp’ of creating a sobering centre for intoxicated individuals.

“For several years this has been a desire of mine to see established in this city. I think it’s long overdue and decades overdue,” said Wright, adding a local non-profit has begun a pilot program in December.

“Northern Health appears to be interested in participating so I’m hoping that can be developed in a more robust and permanent and effective system moving forward but I think we are on the cusp of that which is long overdue.”

Wright says this would have a big impact on the downtown core.

The data shows the number one call for service to downtown is mischief followed by cause of disturbance. Wright says these calls are ‘non-criminal’ in nature and usually develop over conflict of use.

The stats show also show a spike in police generated files in 2020 – especially from April to September, and Wright says this is because of the proactive policing done with the Downtown Safety Unit.

“We are down there first thing in the morning and dealing with them prior to them becoming nuisances and having it called in or we are already in the street when a fight occurs,” explained Wright.

“Undoubtedly, COVID would have played a part of that too because when some of the businesses were closed they wouldn’t be making those calls.”

Wright said the Prince George RCMP is also ready to implement a Situation Table Hub Model. This will coincide with the establishment of a downtown public safety office.

An RCMP led Situation Table was identified as a key priority at the Sept. 15, 2020 Select Committee On a Clean, Safe and Inclusive Community workshop.

Situation Tables (also known as Hubs) help front line staff from the public safety, health, and social service sectors to identify vulnerable people and collaboratively and rapidly connect them to services before they experience a negative or traumatic event.

Situation Tables empower agencies to reduce a broad range of risks that can impact a person’s well being and safety.

“Finally after about a year and a year and a half discussion that will be up and running hopefully in the next six weeks. The training and establishment of that should be in mid-February,” explained Wright.

“A lot of our community and partner agencies will come together to address that crisis hopefully before that tipping point.”

The RCMP have confirmed that the Situation Table will convene at the Public Safety Office which the city is planning on opening in spring 2021.

Wright says the pressures moving forward for the Prince George RCMP in 2021 continue to be Covid-19, human resources, homelessness and public drug and alcohol consumption, and legal system changes.