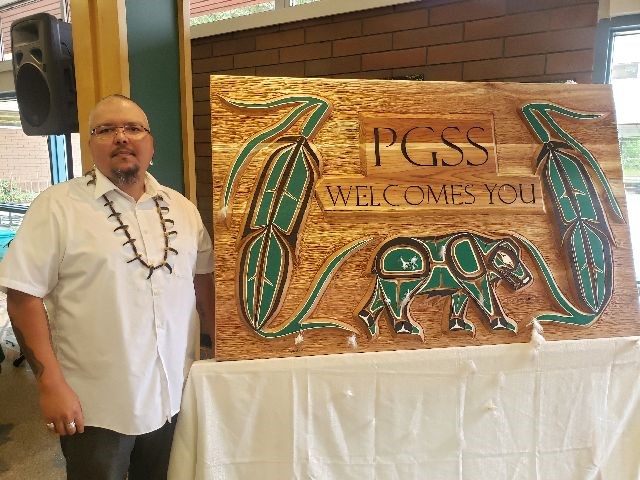 Clayton Gauthier with the new sign. (via School District No. 57)

The sign features a polar bear centred at the bottom, wrapped around the sides by feathers. On top of the polar bear and between the feathers are the words "PGSS Welcomes You". The primary colour is PGSS green, with black and white outlining and highlights.

“There is a high number of Indigenous youth at the school,” Gauthier, who was asked by PGSS administrators to make the sign, said in a news release. “Art holds a lot of power and they wanted to get the kids feeling more at home, in a sense. We incorporated the polar bear because it’s the school’s logo. As we were moving forward with the design, I put in two feathers, and the two feathers represent the road of life. Also, there’s two in there because of the balance that we need in our lives.”

Students and staff also helped Gauthier work on the sign, when he began carving last Fall in a space set up inside the school.

Gauthier said he was pleased to welcome so many people into the carving process and to teach them some of the techniques involved.

“People came in and tried it out and some of them stayed right from the beginning until the end. It was a variety of ages, from Grade 8 to Grade 12, and there were even adults. Teachers were carving too – all people (Indigenous and non-Indigenous). They were learning about the tools and different carving techniques."

Gauthier’s own mentor was Peter George, a Wet’suwet’en master carver.

One of their signature works is a 16-foot by four-foot cedar carving that hangs in the lobby of the University Hospital of Northern B.C. (UHNBC); work on that piece began in 2011.

“That was the first time I really got the chance to learn from an elder,” Gauthier added in the release. “From his teachings, that’s where I’m at now with the carving.”

The sign was officially unveiled at the eighth annual Fruits of the Forest Feast which was held on Friday (June 7).

The gathering is hosted by the school’s Aboriginal Education Department and its purpose is to celebrate graduating students and bring them together with First Nations Elders, as well as teachers, senior administrators and from School District No. 57 (SD57) board members.

The Welcome to PGSS sign will become the focal point in a reimagined front foyer at the school.