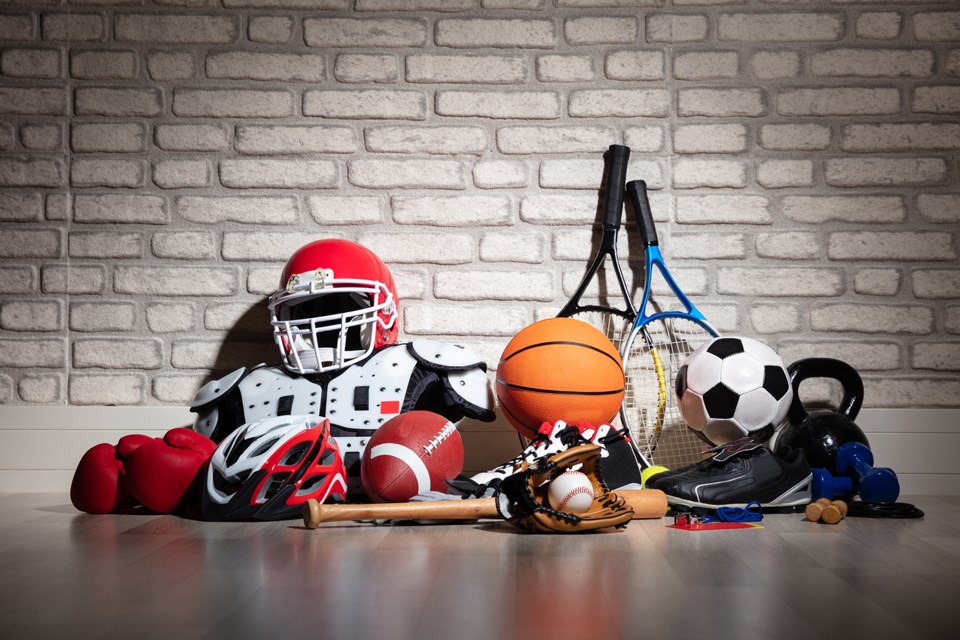 Sports equipment against a brick wall. (via File photo)

Sports are set to continue during the latest order by Provincial Health Officer Dr. Bonnie Henry, but with one major setback.

She announced on Thursday (Nov. 19) that while viaSport BC COVID-19 guidelines will remain in Phase Three, there’ll be no travel for teams outside their own health authority's region and spectators will remain prohibited in an effort to reduce any potential spread.

Phase Three allows sports organizations and athletes to have game-play, practices and training.

Teams were even allowed to travel for exhibition or tournament matches, but no official regular-season play up until yesterday’s announcement.

"Part of the sports networks and sports organizations had inter-regional travel, so they have their own defined regions and that needs to stop,” said Dr. Henry during her update, to which she reported 538 new COVID-19 cases in B.C., including 11 in Northern Health for a regional total of 563 since March.

“You can play games within your own region only and there’s no travel between different areas. That’s where we’re seeing the risk and the risk is people carpooling together, having to stay overnight [...] that has to stop right now. We can’t have that type of travel. We also have to pay attention to those pre-game, post-game, off the field of play situations where we’re coming together and that’s where the no spectators comes in because we have seen that people are getting together.”

Since her statement, Prince George sports teams, primarily hockey, have said they’re looking to seek ‘clarification’ on what this means moving forward as these orders will formally end in two weeks on Dec. 7, but there’s a possibility for them to be extended if the current infection spike doesn’t improve.

Prior to Dr. Henry’s province-wide order on travel, most local clubs have been able to compete against Interior Health-based programs as the original two-week alert only applied to Fraser and Vancouver Coastal Health authorities.

For the Spruce Kings, their final scheduled exhibition cohort game in Merritt on Saturday (Nov. 21) prior to the start of the 2020-21 BCHL season has been cancelled.

The league was tentatively set to start on Dec. 1.

“Due to the increased restrictions announced by the PHO, the BCHL has cancelled all exhibition games this weekend,” it said in a statement on social media.

“We are seeking further clarification on how this affects us going forward and will provide an update as soon as possible.”

.@SpruceKings finish 4-2-0-1 in preseason play as their final exhibition game in Merritt (Nov. 21) has been cancelled via B.C.’s new public health orders | https://t.co/BTfJ4RuAGm

In Cariboo Hockey, the Under-18, Under-16 and Under-15 Cougars had been travelling every two weeks to Abbotsford to compete in the Cohort Cup, but was postponed on Nov. 8.

It’s very likely the tournament may be cancelled overall due to the new province-wide order on sports teams, but no official statement has been made by organizers as of this publication.

“Furthermore, all out travel has been put on pause, and our games scheduled for this weekend have been cancelled.”

The Northern Capitals were originally scheduled to play against Kelowna’s Rink Hockey Academy this weekend, Nov. 21 and 22, as well as the Under-16 Cougars against the Thompson Blazers in the Kin Arenas.

The city also announced following the order that any sports team ‘travelling from outside of Prince George will not be able to participate’ in events as a result of the limitations at city facilities and new mandatory mask policy in all indoor public and retail spaces.

The Prince George Cougars are not scheduled to arrive for training camp until Dec. 26 ahead of the WHL’s 2020-21 shortened-season start, tentatively scheduled for Jan. 8, 2021.

The T-Wolves men's and women's programs were scheduled to host TRU at the Northern Sport Centre Nov. 27 and 28, but are now cancelled as well.

HIGHLIGHTS! Check out what was poppin when @UNBCBasketball took on OC Basketball this week at @GoTRUWolfPack in @CanadaWest / @pacwestbc exhibition play! Good stuff from the veterans, and from the newest @UNBC TWolves! #RunAsOne pic.twitter.com/VEdLT1LKa4

Prince George Ringette says it's not overly affected by the new order aside from the restriction on travelling outside Northern Health.

The same scenario is likely for the Northern BC Centre for Skating and the PG Blizzard Speed Skating Club, who've both been hosting training sessions at Kin Arena since its reopening on Aug. 17.

“I know some teams have done this really well where they’ve come pre-dressed so that we’re not in the locker-room,” said Dr. Henry.

“We need to focus on those opportunities, particularly for kids to get out there with their teammates, to do drills and to have games in their local community.”

Prince George Cougars’ Rowdy Cat looking to spread holiday cheer through WHL fundraiser
Nov 18, 2020 8:35 AM
Comments
We welcome your feedback and encourage you to share your thoughts. We ask that you be respectful of others and their points of view, refrain from personal attacks and stay on topic. To learn about our commenting policies and how we moderate, please read our Community Guidelines.