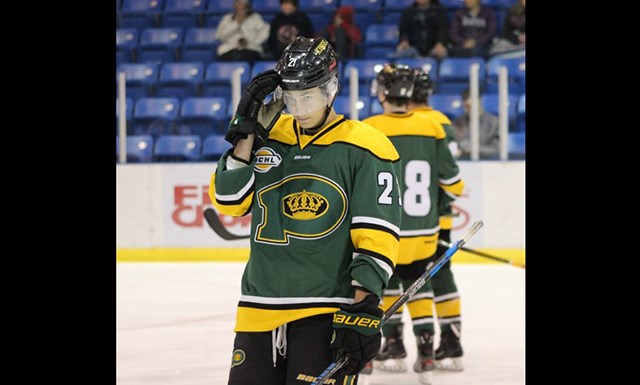 Rowan Miller is a new forward with the Prince George Spruce Kings, originally from Arizona. (via Powell River Kings)

A royal exchange is complete between Prince George and Powell River.

The Spruce Kings have obtained American-import Rowan Miller as part of an earlier trade with the Island-Division Kings which saw rookie Brett Pfoh head south for future considerations.

Miller, an 18-year-old forward from Scottsdale, Ariz. finished with 15 points in 47 games with Powell River in his sophomore season, which included eight goals in the team’s above-500 record in 2019-20.

Prince George General Manager Mike Hawes calls Miller a skilled forward who can compete on both sides of the ice.

“He is a great young man as well who checks the boxes of the type of person we like to add to our organization.”

The 2019 Fred Page and Doyle Cup champions have also added some talent between the pipes with the graduation of Jett Alexander.

Aaron Trotter has committed to suiting up in red, white and blue for the 2020-21 season, joining Carter Woodside as the Kings’ new tandem goaltending duo.

“We hope that he can contribute to our team’s future success and develop into an NCAA prospect.”

The 19-year-old Victoria netminder wrapped up last year with an 11-7-1 record in 19 starts with Shawnigan Lake School in the CSSHL.

He also compiled a 2.57 goals-against average and a 0.904 save-percentage.