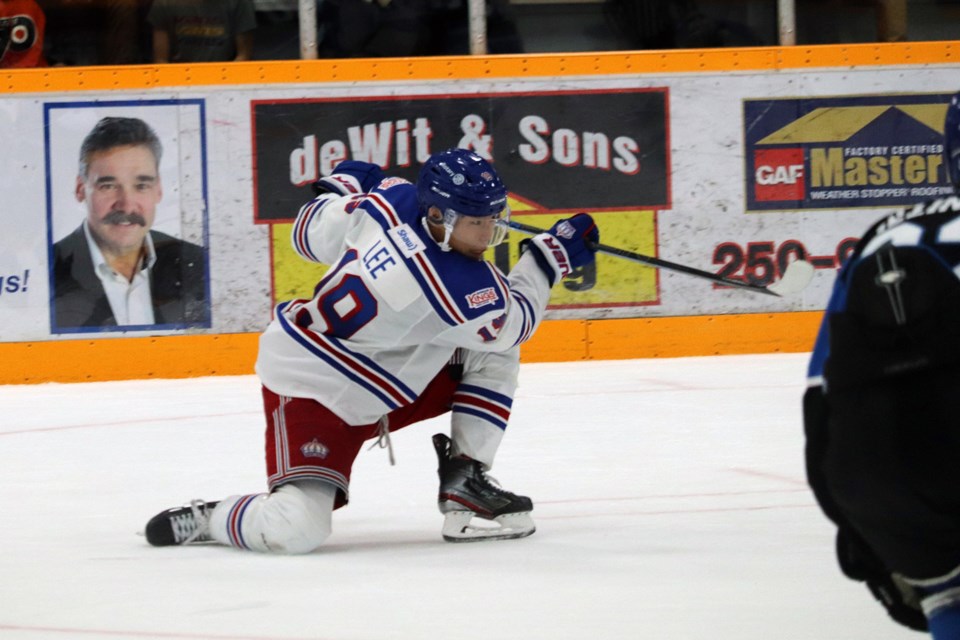 Who let the dogs out?

Certainly not the Prince George Spruce Kings, who got their second win on home ice this year by taking care of business with Alberni Valley in an 8-2 beating Friday night (Sept. 27).

The home side potted six goals in the second period alone, including four in a six-minute span and two on power-plays, and a combined eight points from the scoring trio of Chong Min Lee, Nick Poisson, and Corey Cunningham.

Lee ended up with a game-high four points, all assists, while Poisson (two goals, one assist) and Cunningham (one goal, two assists) had three points each.

Goaltender Jett Alexander made 26 saves on 28 shots for his second victory in the B.C. Hockey League (BCHL) and was even added an assist to his stats sheet on Prince George’s opening goal.

Both teams had strong offensive performances, but it was ‘Kings getting eight pucks by the Bulldogs netminder on 29 shots.

Prince George made it a 2-1 game three minutes later on thanks to Poisson and his starting line-up with Lee and Fin Williams.

After the intermission, the red, white and blue broke loose!

The 8-1 lead left the Bulldogs in a very difficult position to muster a comeback in the final period of play, but they did light the last lamp at the Rolling Mix Concrete Arena (RMCA).

Alexander stopped the other eight shots from the Island Division visitors in cruising to victory and improving the defending Fred Page and Doyle Cup champions’ 2019-20 record to 3-3-2.

Prince George’s second contest of the doubleheader is tonight (Sept. 28), but for the second home weekend in a row, it’ll be against a different two-win team.

They take on the Trail Smoke Eaters at 7 p.m. from the RMCA.

Prince George Spruce Kings swept in season-opening weekend
Sep 8, 2019 8:35 AM
Comments
We welcome your feedback and encourage you to share your thoughts. We ask that you be respectful of others and their points of view, refrain from personal attacks and stay on topic. To learn about our commenting policies and how we moderate, please read our Community Guidelines.