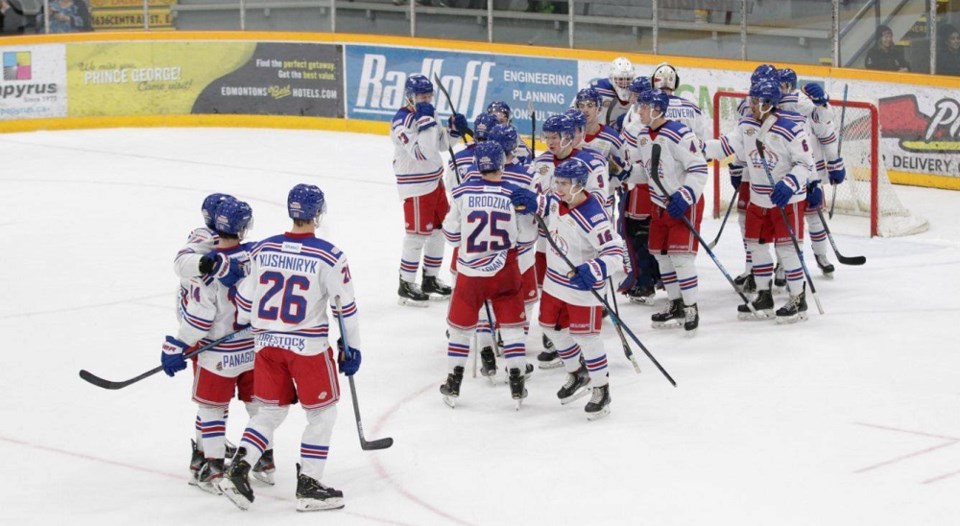 A late comeback was being concocted by their opponents in the first contest of 2020, but the Prince George Spruce Kings managed to stay in the win column a third straight game.

After rolling away to a 4-0 lead in the third period and allowing three goals in a row from the Rivermen afterwards, the ‘Kings avoided a potential tying marker to prevail 4-3 on the road Friday night in Langley (Jan. 3).

Prince George stuck with Carter Woodside between the pipes yesterday as he was the winning goaltender in his team’s final game of 2019, also in Langley, combining for 42 saves on 46 shots in the two contests.

Woodside’s second win with the Spruce Kings this year also came on his 19th birthday.

Friday was also big for Corey Cunningham, who scored his 25th career BCHL goal with his hometown club and only needed 3:50 into the first period Friday to do so.

Defenceman Evan Orr grabbed the 2-0 advantage over the halfway mark of the same frame while on a power-play, taking passes from Nolan Welsh and Mason Waite.

Over 100 seconds later, Nick Bochen potted his fourth of the 2019-20 campaign unassisted to make it 3-0 Spruce Kings all the way to the break.

No goals were scored in the second stanza, but Prince George seized another power-play opportunity 1:54 into the third off a high-sticking call against Langley.

The Rivermen responded 34 seconds later to get on the board, then Kalen Szeto stunned the home crowd with a shorthanded goal before the 10-minute mark of the frame.

He also cut the deficit to the eventual 4-3 final while on a man-advantage with over two minutes left in regulation.

The Spruce Kings have a week off before hosting the Surrey Eagles at the Rolling Mix Concrete Arena (RMCA) on Friday, Jan. 10 and Saturday, Jan. 11, both with 7 p.m. starts.

Last game of 2019 ends in overtime glory for the Prince George Spruce Kings
Dec 23, 2019 7:35 AM
Comments
We welcome your feedback and encourage you to share your thoughts. We ask that you be respectful of others and their points of view, refrain from personal attacks and stay on topic. To learn about our commenting policies and how we moderate, please read our Community Guidelines.