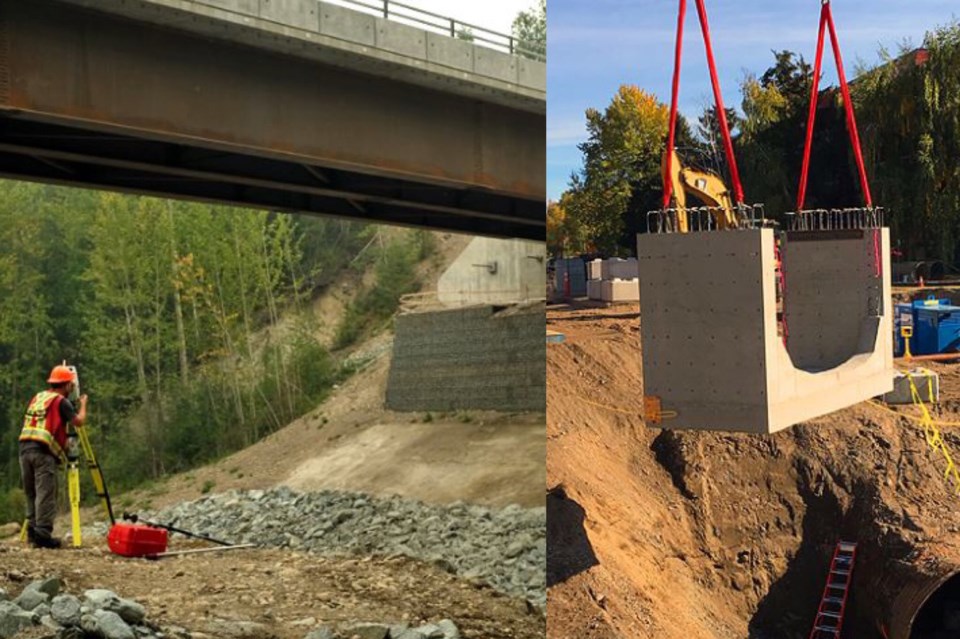 The Willow Cale Road Bridge on the right and the Winnipeg Street sinkhole replacement on the left. (via City of Prince George)

The bills are finally due for a couple of the city’s troublesome infrastructure projects.

A city council’s March 11 public meeting, they addressed the final costs of both the Winnipeg St. Sinkhole and the Willow Cale Bridge Crossing.

The costs amount to over $8.5 million dollars, with the sinkhole racking up $1.7 million and the bridge replacement $6.8 million.

“For this particular projects, which took four months to achieve, and after four incidents of sinkholes we were able to solve the issue,” said Dave Dyer, the city's general manager of engineering and public works regarding the Winnipeg Street sinkhole incidents, which were first noticed in July 2014.

“It was an exploratory process at the start. We had a hunch this might be it, but I had no idea there would be eight-and-a-half metres of pipe that’s full of holes.”

After the fourth sinkhole incident which occurred in June 2018, the city decided to undertake emergency investigations to determine the cause of the sinkholes and make the necessary repairs.

Once crews excavated and drained groundwater from the site, they discovered the failing section of corrugated metal sewer pipe, which also the largest storm sewer main in the city.

Crews excavated seven meters deep, to access and replace the pipe which was also 60 per cent full of sediment. The cost of draining the groundwater alone was $588,069.

“I understand there is no doubt this is a difficult project,” said Coun. Terri McConnachie. “But four instances at the same location in a very short amount of time it does raise red flags.”

She added that the situation is very frustrating for the “average everyday citizen” but that council has no choice to approve to pay this “because we have to pay our bills.”

Another bill city council had to deal with during the meeting was the expenses accumulated fixing the Willow Cale Bridge Crossing.

The project, which was originally intended to cost $3.1 million now has a price tag of $6.8 million.

The new bridge replaced a culvert that was installed a the Willow Cale Forest Service Road back in the 1950s, which became the city’s responsibility in the early 2000s.

Construction began in September 2016 and the bridge opened on March 30, 2017. Fast forward to Aug 2017 when cracks appeared in the new asphalt on the south side of the bridge, indicating unstable ground beneath.

Engineering consultants discovered there was a layer of clay about 20m below the surface that was undetected in geotechnical surveys and provided an unstable base for earth above it.

The city then began to stabilize the ground beneath the bridge, and this was achieved by installing a culvert in Haggith creek and covering it with five meters of fill to counteract the clay.

However, because of the fish habit, the city has to work with federal and provincial agencies to mitigate any effects on fish.  But the culvert can’t be removed because of public safety – the culvert holds over five metres of fill to stabilize the soil in front of the bridge.

After legal consultation, the city decided not to proceed with any legal cost recovery actions against the parties involved in the design, delivery, or construction of the bridge.

Industrial cannabis production facility in the works for Prince George
Mar 12, 2019 10:51 AM
Comments
We welcome your feedback and encourage you to share your thoughts. We ask that you be respectful of others and their points of view, refrain from personal attacks and stay on topic. To learn about our commenting policies and how we moderate, please read our Community Guidelines.