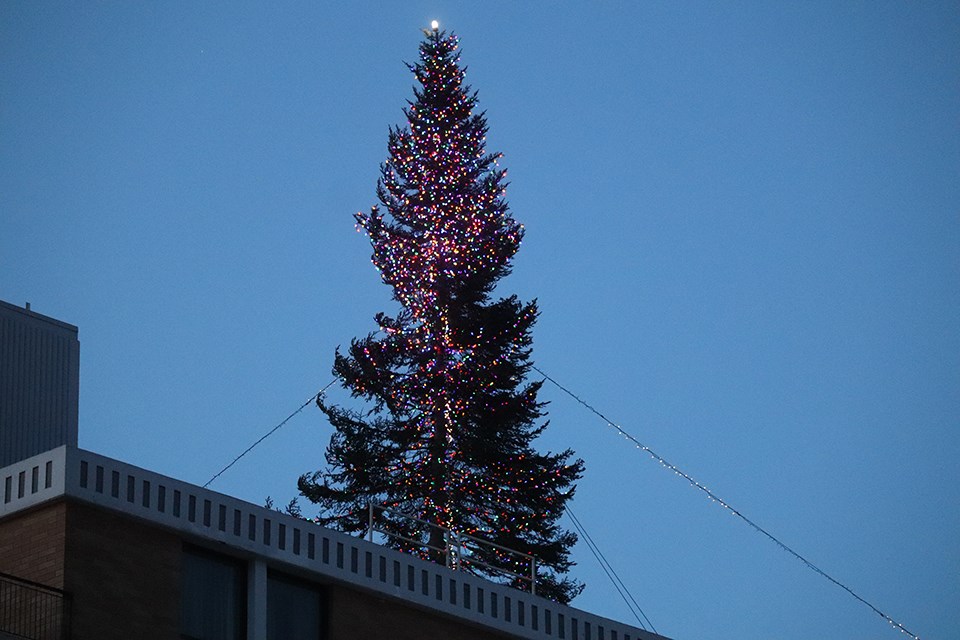 The Tree of Lights on display at the 26th Annual Civic Light Up which took place at Canada Games Place. (via Hanna Petersen)

With only 10 days left in the campaign, the Tree of Lights is only one-fifth of the way lit up, and it needs the community of Prince George’s support to be shining fully this holiday season.

The 60-foot tree atop the Coast Inn of the North Hotel by APA can currently be seen downtown, and as donations come in, more of the tree will be lit up and will become visible across the city.

This year, the United Way of Northern BC (UWNBC) team is raising funds to put toward mental health supports in the Prince George area with a goal of $25,000 and once that's met, the entire tree will be lit signaling the magic of the season.

“While we’ve had overwhelming support to have the tree back in our community, we are only one-fifth of the way to our $25,000 goal. We need Prince George’s help to get there!” says Trista Spencer, Interim Executive Director, United Way of Northern BC, in a news release.

“We are directing all the proceeds from this campaign to mental health supports in Prince George. We chose this area of need due to how prevalent it is in our lives. We are all touched by mental health issues in some way and need to take care of our own mental health on a day to day basis.”

UWNBC will be collecting donations toward this campaign until Sunday, Dec. 22 when they will have a final Light Up event from 3 to 5 p.m. at the Coast Inn.

“Please help us light the Tree of Lights and bring the light of hope to so very many in our community," adds Spencer. "We truly want to provide people with this vital support so they can thrive rather than just survive."

Donations can be made at the UWNBC office on the fifth floor of the Prince George Native Friendship Centre, at the front desk of the Coast Inn, or online.

On Our Radar: Get your holiday shopping done at Prince George's annual Winterfest Christmas Market
Dec 11, 2019 11:45 AM

12 Prince George Christmas events to make your holidays merry and bright
Nov 27, 2019 3:20 PM
Comments
We welcome your feedback and encourage you to share your thoughts on this story. We ask that you be respectful of others and their points of view, refrain from personal attacks and stay on topic. To learn about our commenting policies and how we moderate, please read our Community Guidelines.