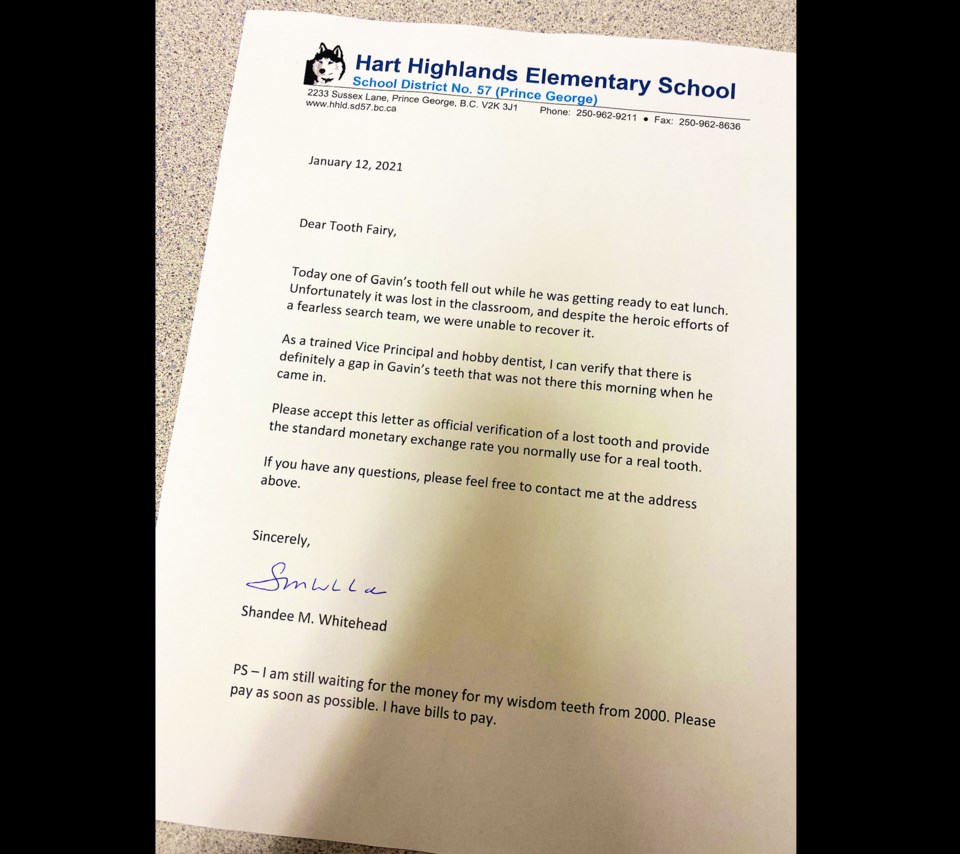 A Prince George Vice Prinicipal had fun with a letter after a student had a tooth fall out in class but then couldn't find it to submit to the tooth fairy.Shandee Whitehead Twitter

A Prince George educator had a fun way to help a student who needed to get ahold of the tooth fairy after one of his teeth fell out in school.

However, no one was able to find the lost tooth in the Hart Highlands Elementary classroom, prompting Vice-Principal Shandee Whitehead to write a letter that she personally signed and later shared to social media.

"Today, one of Gavin's tooth fell out while he was getting ready to eat lunch," the letter says.

"Unfortunately, it was lost in the classroom, and despite the heroic efforts of a fearless search team, were unable to recover it."

Whitehead then decided to have some fun with the letter.

Well said @shandeemay1 & something that student will recall fondly in the future!🦷 https://t.co/plqbDSjBO5

She explained, as a hobby dentist and trained vice-principal, she could verify that there was a new gap in Gavin's mouth that was not there in the morning when he arrived at school.

"Please accept this letter as official verification of a lost tooth and provide the standard monetary exchange rate you normally use for a real tooth.

"If you have any questions, please feel free to contact me at the address above."

It also appears the tooth fairy owes money to Whitehead herself from two decades ago and has yet to receive it.

"Please pay as soon as possible. I have bills to pay."

In the tweet posted to her personal account, Whitehead says it was her duty to create a positive school culture.

"In addition to contributing to a long-term plan for student success, cultivating leadership in others, managing people, data and processes and helping improving school leadership... A VP has the duty of helping to create a positive school culture... One that saves the day!"

The tweet has since captured the attention of many regional educators and the general public with almost 50 retweets and nearly 400 likes as of this publication (Jan. 14).

In addition to contributing to a long-term plan for ST success, cultivating leadership in others, managing PPL, data, & processes, & improving school leadership ... a VP has the duty of helping to create a positive school culture ... one that saves the day! pic.twitter.com/udZhQ19SGV