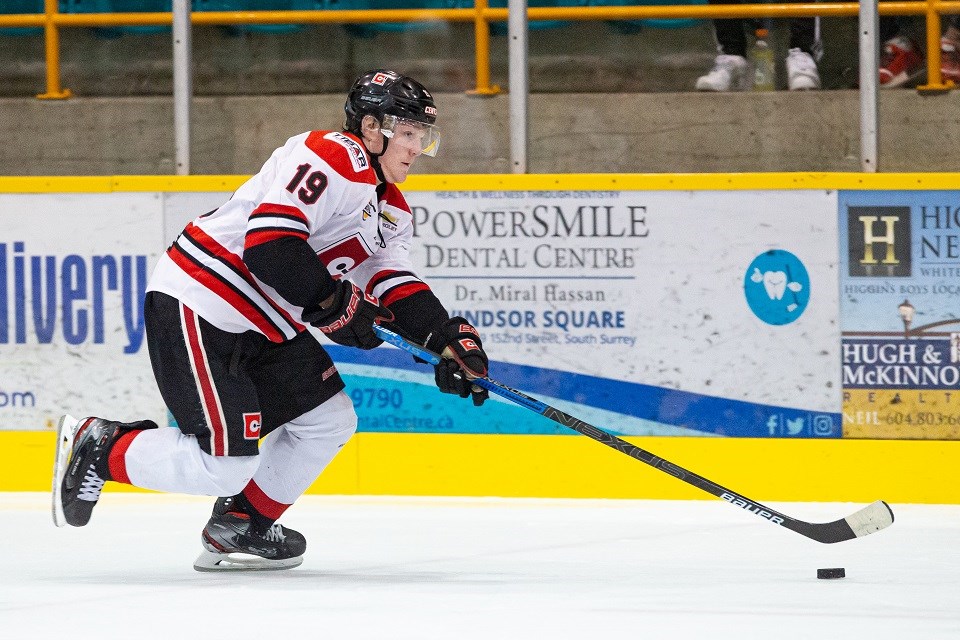 Brophy Dunne is a Prince George hockey defenceman who will play for the Spruce Grove Saints (AJHL) for the 2020-21 season. (via Merritt Centennials/Garrett James Photography)

A Prince George hockey player is converting to become a Saint.

Brophy Dunne, after spending his rookie season in the BC Hockey League (BCHL), is on his way to Alberta in a trade to the Spruce Grove Saints earlier this month.

The 18-year-old suited up with the Merritt Centennials last year, a team slated to host a handful of Prince George and northern B.C.-grown athletes for 2020-21.

Dunne played 56 games in the red, white and black in his rookie season, tied for first among Cents’ defencemen and total first-years.

On the scoresheet, the soon-to-be junior ‘A’ sophomore contributed nine assists and 11 points, along with 61 penalty minutes.

Dunne moved up the ranks a year after helping the Cariboo Cougars claim the 2019 BC U18 AAA Championship.

That marked the team’s third blue banner in program history and their second in three years.

From the blue-line, Dunne posted nine points in 33 regular-season games, plus two more in seven playoff games en route to the trophy.

The Spruce Grove Saints finished fourth in the league standings last season, second in the north division, with a record of 43-13-2-0.

They won their first 2020 playoff series 4-2 over Grande Prairie, but didn’t start the second round as COVID-19 cancelled the rest of the postseason.

In June, the AJHL voted to move forward with a 2020-21 season should Alberta provincial health regulations allow.

Teams are currently hosting training camps like their BCHL counterparts.