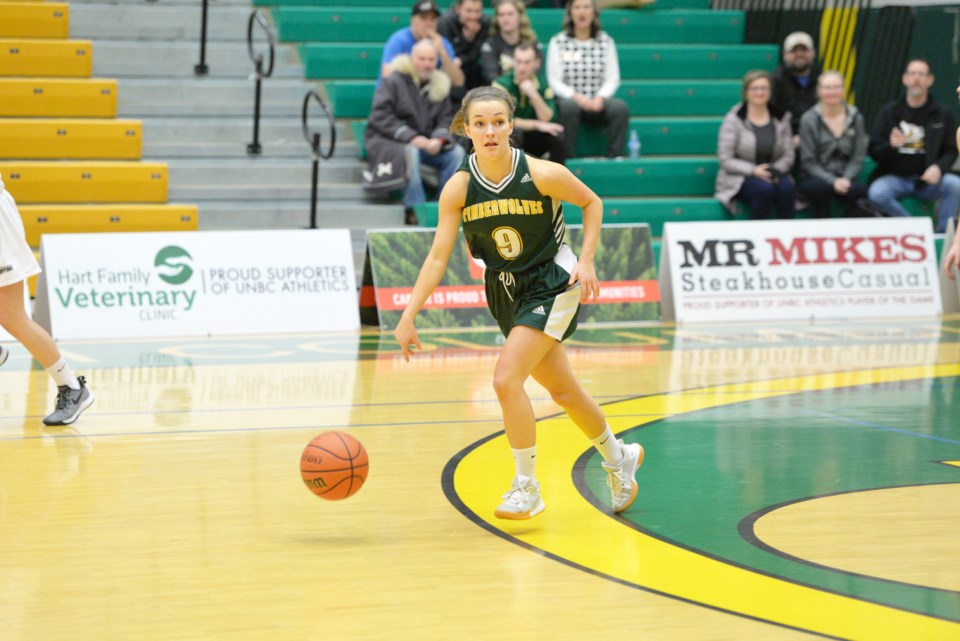 They still have just six players.

That's only one substitute available on the bench, but the UNBC Timberwolves women's basketball team was able to dehorn the Pronghorns in an incredible double-OT 93-85 win in Lethbridge during the play-in round of the 2019-20 Canada West playoffs tonight (Feb. 14).

This was the ninth win in a row for the Lady T-Wolves and the second Canada West playoff win in school history.

Going into the game, both teams were identical: they finished eighth and ninth in the standings at regular season's end and they both held 11-9 records, with UNBC getting above .500 after starting the season 3-9.

However, due to RPI, Lethbridge was awarded home-court advantage, something all teams want to make the most of.

The Pronghorns started strong, coming out confident in front of the home crowd with Kacie Boscch dropping a quick four points.

Maria Mongomo answered for UNBC by hitting two three-pointers to cut into Lethbridge's lead, but the Pronghorns were up 21-18 after the first quarter.

The second frame saw the T-Wolves run into a bit of trouble as Lethbridge carried themselves to a 13-point lead heading into the break at 43-30.

The Pronghorns' hot shooting started to cool in the third, which gave the Timberwolves a chance to climb back into the do-or-die contest. Lethbridge saw its lead dissipate to six, with Rebecca Landry being a contributor and the score read 58-51 in favour of the blue and white.

UNBC's under-staffed bench startes to show signs of fatigue, but they didn't quit and made it a four-point game with five minutes left.

The Timberwolves fought all the way back and take a short lead but Lethbridge wasn't going to let home-court advantage go to waste just yet, hitting a shot at the other end as time expired.

UNBC has had a flair for the dramatic all season and overtime was no different.

Lethbridge was able to frustrate UNBC quickly, creating three turnovers in the first minute, but Madison Landry and Mongomo came up huge again to tie the game at 78.

Mongomo, who is graduating at the end of this season, had the chance to play hero when she went to the charity strike with just six seconds left in the first overtime. She'd miss both and both teams went to another round of overtime.

Hometown product Emily Holmes, also graduating at the end of this season, wasn't going to go out losing in double overtime.

The Duchess Park product caught fire and sunk two three-pointers and a pair of free throws to give the Timberwolves a much-needed lead they would hold onto for the 93-85 victory.

She posted 14 points last night, along with six rebounds and four assists.

Madison Landry once again left everything on the court scoring 30 and adding five assists. Mongomo had a double-double with 22 points, 10 rebounds, five steals and four assists.

vanBruinessen also had a double-double for UNBC with 14 points and 15 rebounds.

The Timberwolves will play in the quarterfinals of the Canada West 2019-20 playoffs.

W🏀 | What a game.
The Pronghorns fall 93-85 in an incredible double overtime finish. What an incredible season by the 'Horns, and thank you to seniors Kacie Bosch, Katie Keith, and Asnate Fomina.#GoHorns pic.twitter.com/DacYaoMaF6

Mountain's peak: UNBC Timberwolves howl from top of Canada West basketball season-scoring climb
Feb 11, 2020 8:35 AM
Comments
We welcome your feedback and encourage you to share your thoughts on this story. We ask that you be respectful of others and their points of view, refrain from personal attacks and stay on topic. To learn about our commenting policies and how we moderate, please read our Community Guidelines.