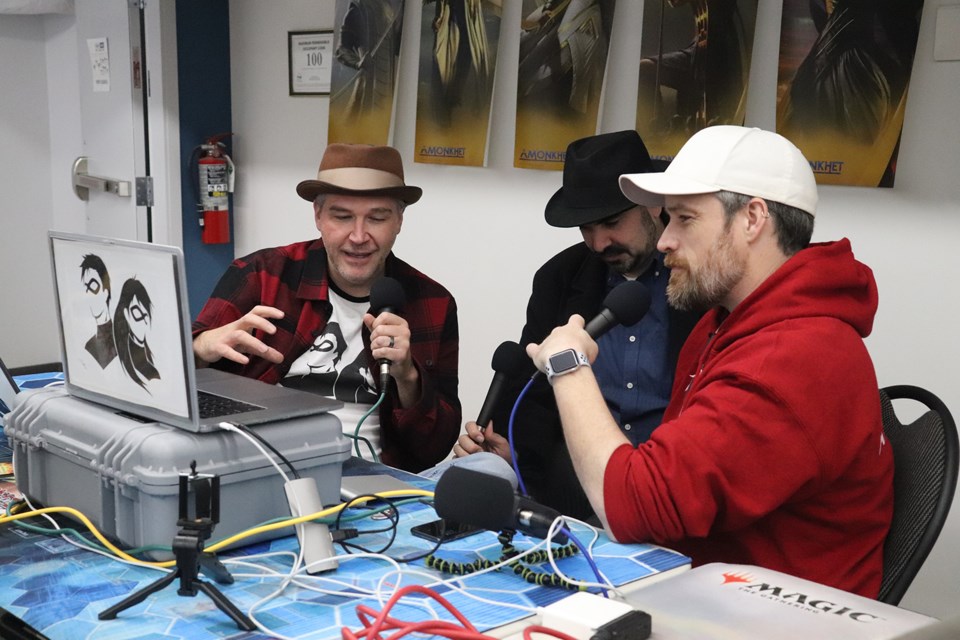 Norm Coyne hosts a livestream during the final moments of the Kickstarter campaign at Great White Toys and Games. (via Hanna Petersen)

One of the city’s biggest events began its $100,000 venture on Aug. 30, hoping to bring in that much money through Kickstarter to help make the sixth annual convention a reality.  Only four days ago the event was less than halfway to its goal.

“I had 1000 per cent confidence in our community that we were going to be able to pull it off. But it was hard yesterday to keep that confidence because we were looking at $40,000 to raise in 18 hours,” says Norm Coyne, founding director of UNTLD Media.

This is the first year UNLTD Media will be organizing the event solo since it started in 2015.

“We had a big contributor come on in Cameron Stoltz from Great White Toys Games and Comics. He came on board in a big way,” says Coyne. “And it helped us move the needle and it helped create the excitement. People want to support something that succeeds and that’s what gave us the momentum.”

He says the support from Great White was the tipping point, and after that the pledges just started rolling in.

“We’ve had tremendous support from the community. It’s really inspiring to see how many people didn’t want to see the event go away.”

He says Northern FanCon has received support from businesses and individuals through donations, pledges and sharing on social media.

“That’s been almost the best part. Obviously we hit our target which is the best part but a close second has been seeing the support the community has actually given us.”

Coyne says Northern FanCon 2020 is already in the works and the community can expect to see guest announcements next month. They will also be launching a poll on social media asking people who they want to see at FanCon.

“Then what we do every year is we look at who we can get and what makes the most sense from there we want to move very quickly,” says Coyne.

When the Kickstarter campaign officially closed today (Sept. 29) the event raised a total of $103,322 from 349 backers.

Coyne says he sees the momentum from the crowdfund carrying through to the event which will be held at the CN and Kin Centres from May 8 to 10, 2020.

He says he’s even had supporters and messaged from people who have never been to FanCon before.

“That’s part of the reason we wanted to do a crowdfund as well, obviously it’s to sell tickets in advance and to sell booths in advance, but it was also a way to shake up the community a little bit and to get people to remember why they wanted to go or encourage them to actually take that leap,” says Coyne.

“It’s been a really wild ride over the last 30 days but I’m glad where we are at and I’m super excited to see FanCon 2020 move forward.”

Prince George author crowdfunds thousands for Dungeons & Dragons rule book
Jun 10, 2019 1:11 PM
Comments
We welcome your feedback and encourage you to share your thoughts. We ask that you be respectful of others and their points of view, refrain from personal attacks and stay on topic. To learn about our commenting policies and how we moderate, please read our Community Guidelines.