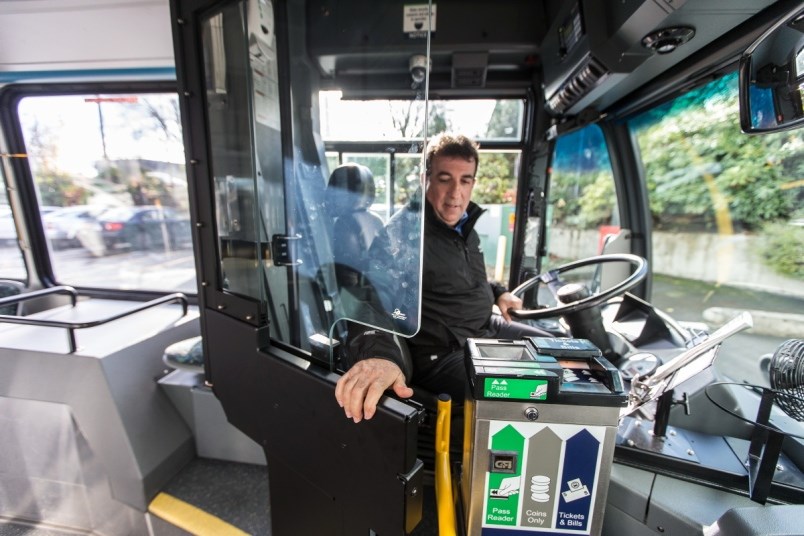 B.C. Transit will start retrofitting 650 buses around the province in early 2020 with protective driver doors.

The move is a response to several violent attacks that injured B.C. Transit drivers.

The $6.5-million project, in co-operation with Arow Global Corp., will include double-deckers, regular 12-metre-long buses and medium-duty buses. New buses with the doors already installed will start arriving in late 2019.

Retrofitting will start in Victoria before moving on to Kelowna.

The “full driver doors” are interior barriers between the driver’s seat and passengers. They are made of laminated, tempered glass with anti-glare coating, and have a metal base.

Drivers have asked for the protective doors for some time, said Ben Williams, their local union president and leader of Unifor Local 333.

“It’s definitely a good thing,” Williams said of the retrofitting.

“Obviously, we’re happy that they’ve announced it. We just hope that they’re in as soon as possible, just to make sure that there’s no other assaults that end up happening on operators.”

He said the news about the doors is a reminder that a driver was badly hurt in January when he was punched by a passenger — something that Williams said a protective barrier would have prevented.

He said a driver was robbed a few weeks ago, but wasn’t hurt.

“Since 2017, we’ve been doing the trial so that we can find the best fit for our buses and our operators and our customers, and we feel pretty confident we’ve harmonized that in this new design.”

The trial involved using the doors in several locations, including Victoria, Abbotsford and Kelowna, Palmer said.

He said retrofitting of the entire system should be complete by 2022.

Palmer said the barriers are not floor-to-ceiling, nor do they go all the way forward to the front windshield, but they are designed with enough height and depth to provide the driver with protection from attack from the rear.

He said the gap between the barriers and the roof of the bus is about half a metre.

While there are no holes in the barriers for sound, testing showed they posed no obstacle to communication between drivers and passengers.

Bus driver not to blame in B.C. bus crash triggered by moose
Aug 23, 2019 8:05 AM
Comments
We welcome your feedback and encourage you to share your thoughts on this story. We ask that you be respectful of others and their points of view, refrain from personal attacks and stay on topic. To learn about our commenting policies and how we moderate, please read our Community Guidelines.