The network will connect communities with the information, supports and training
Nov 21, 2019 9:05 AM By: Canadian Press 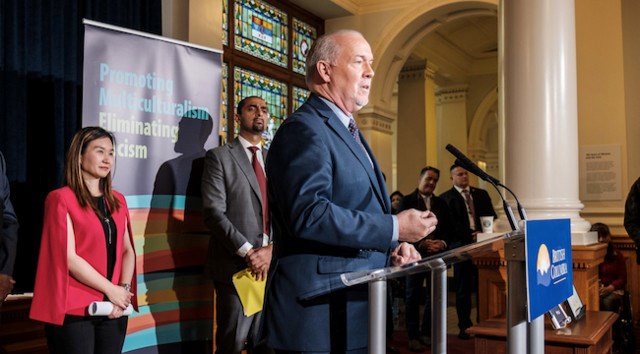 The British Columbia government is introducing a new program that it says will empower local communities to identify and challenge racism and hatred.

Premier John Horgan announced the creation of the Resilience BC Anti-Racism Network at a news conference in Victoria Wednesday.

The network will connect communities with the information, supports and training needed to respond to and prevent future incidents of racism and hate through a $540,000 annual fund.

It replaces the Organizing Against Racism and Hate program after the government says it heard requests through consultations to redesign the program to increase support for community organizations.

In the coming months, a request for proposals will be issued to identify a central provider to deliver services provincially.

Individual communities will be engaged early next year to become part of the network of up to 40 local service providers.

Horgan said that while the government has a role to play in building a more equitable society free of hate, it also has to take place at the community level.

"We believe we should have grassroots support for this because if we cannot go community by community, neighbourhood by neighbourhood, and build inclusion and tolerance, we will at the end of the day fail," Horgan said.

The formation of the network follows from recommendations gathered through 21 community dialogues held in 13 municipalities throughout B.C. led by MLA Ravi Kahlon, when he served as parliamentary secretary for multiculturalism.

"We've taken these steps because we are adamant that racism and discrimination has no place in B.C.," Kahlon said.

The network will include a central hub to share best practices, offer training and enhanced communication among local, community-based organizations around the province.

The previous program, Organizing Against Racism and Hate, was established in 2001 to support a co-ordinated community approach to the problem.

It provided an agreed protocol on how to respond to an incident of racism and included a responsibility to provide an annual summary of incidents of racism observed or reported in each community.