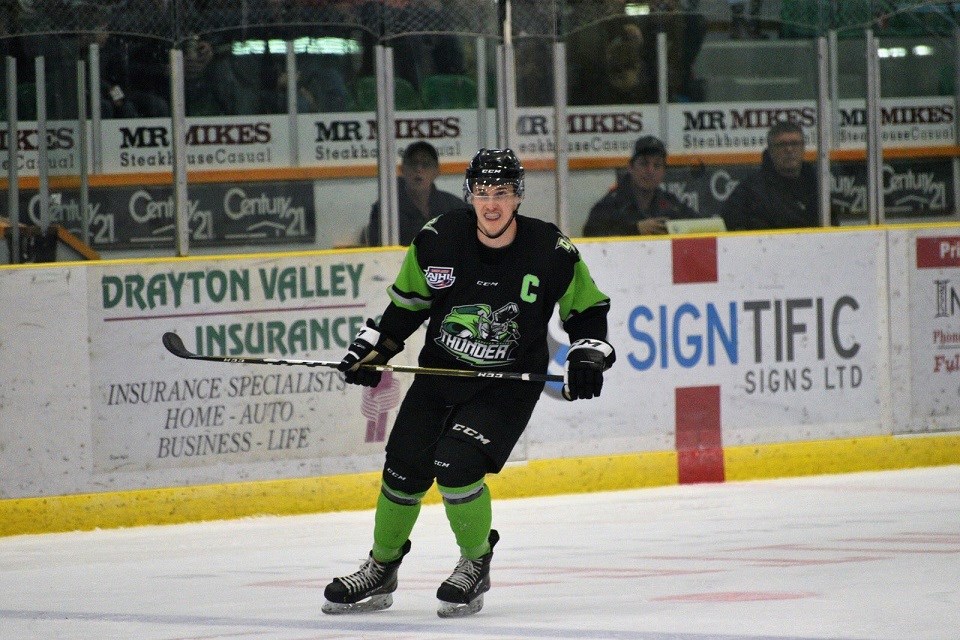 The Niagara Purple Eagles are adding a new bird to its men’s hockey convocation hailing from Prince George.

The NCAA Division One school, located a stone’s throw from Niagara Falls, has signed Jesse Pomeroy for 2020-21 after spending the last three seasons in the Alberta Junior Hockey League (AJHL).

The 21-year-old had the ‘C’ stitched on his Drayton Valley Thunder sweater for his final season of junior ‘A’ hockey, three years after captaining his hometown-Cariboo Cougars to a BC U18 AAA championship in 2017.

He played 155 regular-season games in Alberta, recorded a combined total of 40 points, including six goals and 34 assists, and was named top defenceman for Drayton Valley from the 2019-20 campaign.

Finishing up his 3rd season with The Thunder and being named this years Captain, #4 Jesse Pomeroy is this years recipient of the Top Defenseman Award 🏆
Pomeroy this fall will be playing NCAA Div l Hockey for the Niagara Purple Eagles at Niagara University
Congratulations Jesse! pic.twitter.com/NgWgChWT1j

Pomeroy helped the Thunder reach the semi-final round of the 2020 AJHL playoffs, but was cancelled before it began due to COVID-19.

He joins a Niagara Purple Eagles program that appears to be on an upward trend of winning despite its 12-18-4 overall record last season in the 11-team Atlantic Hockey Conference.

The birds went to the championship final in 2019, but lost in overtime to American International.

As of this publication, there’s no tentative date for NCAA on when or if sports will be played in the fall.

‘Stability comes with trust’: Cariboo Hockey says 2020-21 plans resuming as normal during COVID-19 restart
Jun 15, 2020 11:35 AM
Comments
We welcome your feedback and encourage you to share your thoughts. We ask that you be respectful of others and their points of view, refrain from personal attacks and stay on topic. To learn about our commenting policies and how we moderate, please read our Community Guidelines.