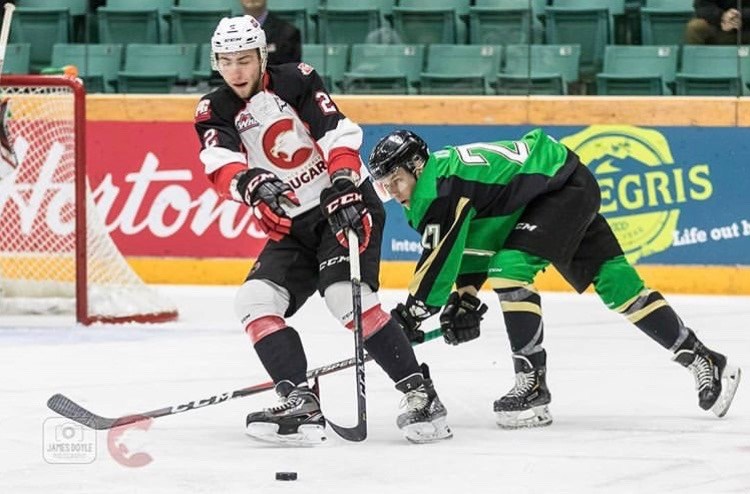 The visitors picked up the pace of Wednesday night’s game in the final period despite the Prince George Cougars’ efforts to keep a firm grip on their sticks, eventually falling to the Raiders in a 6-2 decision.

Cats goaltender Taylor Gauthier had a valiant 43-save performance, while Ian Scott, Canada’s back-up netminder at the 2019 World Juniors last month, stopped 23 of 25 for Prince Albert. 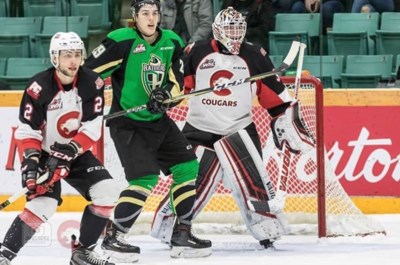 Prince George went 0/3 on the power-play and 5/6 on the penalty kill.

The Raiders began the evening with a 2-0 lead in the first, potting both goals in four minutes.

Cougars forward Jackson Leppard would cut the scoreboard in half at 2-1 before heading to the locker-room after 20 minutes of play.

Brendan Boyle and Josh Curtis (Captain) assisted on Leppard’s ninth of the 2018-19 season.

Prince George tied up the contest early in the middle frame with Mike MacLean redirecting a shot from Ryan Schoettler from the point; Rhett Rhinehart also picked up an assist.

The 2-2 stalemate went on for eight full minutes, but from there, Prince Albert took over, scoring one before the start of the third period, and following up with three unanswered goals ahead of the final buzzer.

The Cougars’ record now reads 16-23-1-2 and they still hold the second wild-card spot in the WHL’s Western Conference.

They’ve also won three of their last five games, with a 2-1 record halfway through their six-game homestand at the CN Centre.

Prince George will host a weekend doubleheader against the Kamloops Blazers this Saturday (7 p.m.) and Sunday (2 p.m.).

Prince George Cougars thump Rockets in first home game of 2019
Jan 12, 2019 12:01 PM
Comments
We welcome your feedback and encourage you to share your thoughts. We ask that you be respectful of others and their points of view, refrain from personal attacks and stay on topic. To learn about our commenting policies and how we moderate, please read our Community Guidelines.