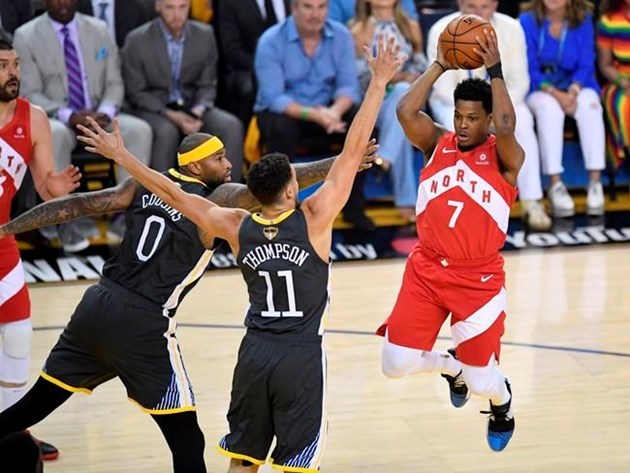 The Toronto Raptors are one win away from their first NBA Championship in franchise history. One win away from upending two-time defending champs Golden State. One win from bringing the Larry O'Brien Trophy to Canada for the first time, and igniting what's sure to be mass pandemonium among Raptors fans from coast to coast.

Pressure? Nah. Not according to Kyle Lowry.

The veteran point guard says he's living the dream. Pressure, he said, is his mom Marie Holloway waking up at the crack of dawn and travelling 90 minutes to work on Philadelphia's public transit to feed her kids.

"Getting up at five in the morning and going to work and making me cereal, having a bowl of cereal sitting in the refrigerator with some milk and being able to provide for me and my brother and my family . . . that's pressure. That's pressure to me," Lowry said Sunday.

The Raptors can clinch the title with a victory over two-time defending champion Golden State on Monday at Scotiabank Arena. It would cap an historic post-season run that has captured Canada's collective imagination and whipped Raptors fans into a frenzy.

But don't tell the players that.

"We didn't do nothing yet. We haven't done anything," said Lowry, who's making his Finals debut in his 13th season in the league. "We still got to get one more win. It's the first to four."

The Raptors have drawn comparisons to the 2004 Detroit Pistons, who, armed with a rock-solid defence, upset a Los Angeles Lakers team loaded with stars to win the Larry O'Brien Trophy.

But Toronto has talked about the NBA title as being its ultimate goal since Day 1 of this season, after president Masai Ujiri acquired enigmatic star Kawhi Leonard for DeMar DeRozan in the blockbuster trade of the summer, then added Marc Gasol at February's trade deadline.

Over the course of the season, they've developed a collective personality of quiet calm in the midst of the storm. After stealing two wins on Golden State's home court, it was tough to tell the newcomers from a stacked Warriors team playing in its fifth straight Finals.

Leonard has been the team's Zen master after missing all but nine games last season with San Antonio. In the moments the Raptors have trailed this post-season, the 27-year-old has settled them down. He's reminded them to enjoy the moment.

"It's why you're here," he said Saturday. "You never know when those times will come when you're not going to be able to play or you get injured."

He's perfected his unique unflappability, he said, over his years of playing.

"Just learning from past experience, past games that I lost, games that I won, seeing what I felt like or what I was thinking at those specific times and just bringing it back to current-day reality, the moment that I'm in," he said.

The 33-year-old Lowry echoed Leonard, saying his ability to live in the moment has improved over the years.

"Every day isn't given to you," Lowry said. "You just should be happy you wake up every day. People ask me how I'm doing and I say, 'I'm great. I'm alive.' That's kind of the staying-in-the-moment thing that I've always lived by.

"We've just kind of made that the forefront of our team. I'm here playing basketball for a living. I'm healthy, my kids are healthy. Life's pretty good."

A reporter repeated Lowry's philosophical words to Warriors coach Steve Kerr on Sunday. The coach was equally thoughtful when he talked about appreciating the moment.

"We play basketball for a living or coach for a living. We're among the luckiest people on earth," Kerr said. "It's all perspective. We are incredibly lucky to live the lives that we do and to be here competing for an NBA championship. When you talk about pressure and daunting tasks and all that, just look around the world. We're doing all right and we're lucky and we know how lucky we are."

The Raptors were back home Sunday after winning twice at Oracle Arena in Oakland, Calif. They've won seven of their last eight post-season games.

Hundred of fans made the trip to Oakland for Games 3 and 4 serenading the team with "O Canada" as they walked off the floor. Back home, Raptors fans started staking their spots in the lineup to get into Jurassic Park on Saturday — two days before Game 5 tips off.

Random "Let's go Raptors!" chants have broken out at gatherings across the country, including the Canadian Open golf tournament in Hamilton. It's happened in bars, in schoolyards, and on flights landing in Toronto.

Nick Nurse was pleasantly surprised to hear that.

"I always learn this stuff when I come to press conferences," the rookie head coach said.

The residents in his condo building, he said, had posted a picture in his elevator of a viewing party they'd held for Game 4, "so I wouldn't miss that."

Can the team embrace the fan frenzy?

"I think we have been embracing it this whole time," Leonard said. "Just enjoying the support and the energy that they're bringing to the team."

A young boy who was reporting for CBC Kids prompted an emotional response from Lowry when he asked how it felt to be an icon for kids across Canada.

"That's a crazy question. I ain't never been asked that one. I don't know," Lowry said. "I will put it this way: I was once a kid and I was once in your shoes. To be able to know kids one day will want to be like me, I hold myself to a super high standard.

"I want kids and you to see a man that's really professional, really about his business, but at the same time he's still fun and loving and everything else."

If Golden State wins Monday, the series would go back to Oakland for Game 6 on Thursday.