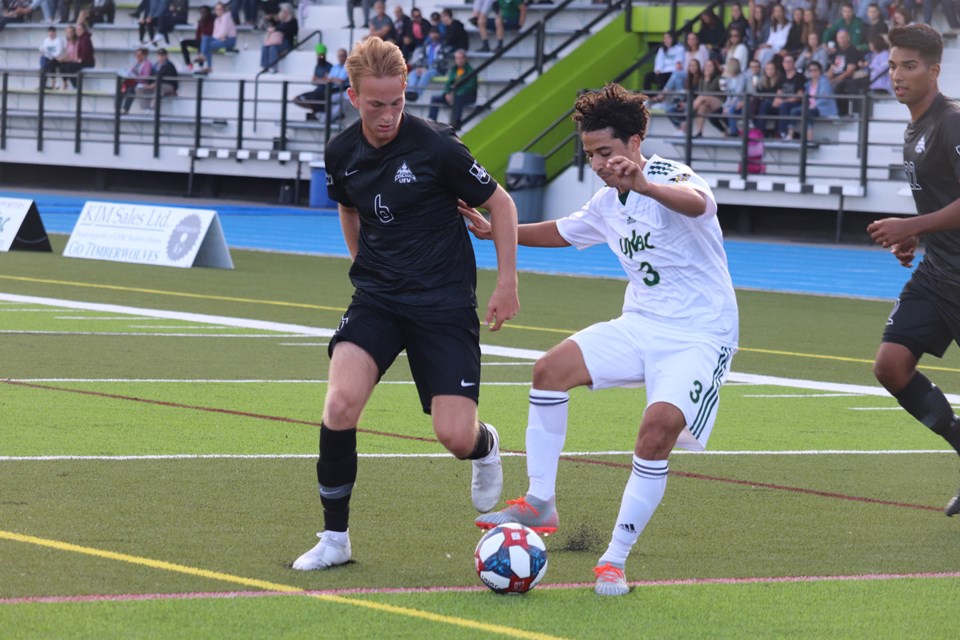 A tough battle through and through led to different challenges for the UNBC men’s soccer squad on Sunday afternoon (Sept. 1).

In the end, the three points in Canada West action went to the visiting side as the Timberwolves fell 3-1 at the hands of the Unversity of the Fraser Valley (UFV), going 0-1-1 in their home-opening weekend of the season.

A call against UNBC while in their own box in the 74th minute awarded a penalty kick to the Cascades, making room for Gurmaan Jhaj to step up and net the 2-1 go-ahead goal.

Prior to the free-kick, the green and gold argued they touched the ball instead of intentionally taking down Jehmrode Kahlon in front of Rob Goodey’s cage, but the official’s call stood as final.

“Some calls didn’t go out way, but they were a good team,” said T-Wolves’ freshman Reid Adams in a team release. “You have to keep your head up and play how you can. You have to do what you can on the day, and those calls are never going to happen 100 per cent of the time.”

According to UNBC, fives minutes later, a ‘near-identical’ play took place while the home team was pressing on offense as fourth-year Owen Stewart appeared to also be taken down in the box and derived of his own scoring opportunity.

No foul was called, play continued, the Cascades potted an insurance marker in added time, and the final whistle was blown.

“They pressed us, instead of sitting off like last game,” added Adams. “That obviously gave us a different look. It was just a different game all around.”

UNBC gave up the first goal for the fourth time in four games to start the new year, this time coming in the 24th minute and, much like Friday’s (Aug. 30) home opener in Prince George, the score stood 1-0 for the visitors after 45 minutes.

Michael Henman capitalized for the T-Wolves five minutes into the second half, handling the ball from the box after a Jonah Smith corner-kick and into the top corner to tie it up at 1-1.

The second-year now has three points in four games, scoring two goals and adding one assist.

This was also Smith’s 50th cap in a T-Wolves’ uniform.

The Cascades’ third goal came in injury time to seal the 3-1 victory; the final shots on goal were 9-6 for the Timberwolves, along with seven corner-kicks to UFV’s two.

UNBC’s record stands at 1-2-1 in a tie for fifth place with UFV in the Pacific Division of the Canada West conference.

Prince George’s team now hits the road for the provincial capital to take on the University of Victoria Vikes in back-to-back contests on Friday (Sept. 6) and Saturday (Sept. 7).

UNBC soccer teams’ pitch for playoff runs next season begins in August
Jun 13, 2019 9:00 AM
Comments
We welcome your feedback and encourage you to share your thoughts on this story. We ask that you be respectful of others and their points of view, refrain from personal attacks and stay on topic. To learn about our commenting policies and how we moderate, please read our Community Guidelines.