Wil Kushniryk suited up for Kelowna, Tri-City before heading down to BCHL
Oct 22, 2019 4:20 PM By: Kyle Balzer 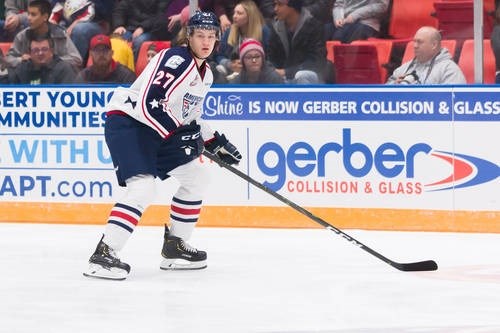 There are now two major junior players on the Prince George Spruce Kings roster in the midst of a struggling start to their championship-defending season.

Wil Kushniryk is joining Jaxon Steele as the team’s latest members with Western Hockey League (WHL) experience and will don a ‘Kings sweater on their Island Division road trip this week.

The 19-year-old has played 115 games over three seasons in the WHL between the Tri-City Americans and the Kelowna Rockets, recording just eight points in that span with five goals and three assists.

Kushniryk also stands at six-foot-five weighing 210 pounds and could present a strong, physical toughness the Spruce Kings are looking for.

"Wil is a veteran player who will give us some size and strength up front while also providing some leadership,” says Prince George General Manager Mike Hawes in a team release. “I feel that we aren't playing a heavy enough game up front on some nights. The addition of Wil should help address this issue."

This will be the first Junior ‘A’ hockey stint for the Chilliwack product.

Kushniryk is now the fifth player to join Prince George after the official start of the 2019-20 season.

The Spruce Kings are currently fourth in the BCHL’s Mainland Division and 13th in the league with a 5-7-2-1 record.

Nanaimo wins shootout contest despite Prince George Spruce Kings’ completed comeback
Oct 12, 2019 9:30 AM
Comments
We welcome your feedback and encourage you to share your thoughts. We ask that you be respectful of others and their points of view, refrain from personal attacks and stay on topic. To learn about our commenting policies and how we moderate, please read our Community Guidelines.