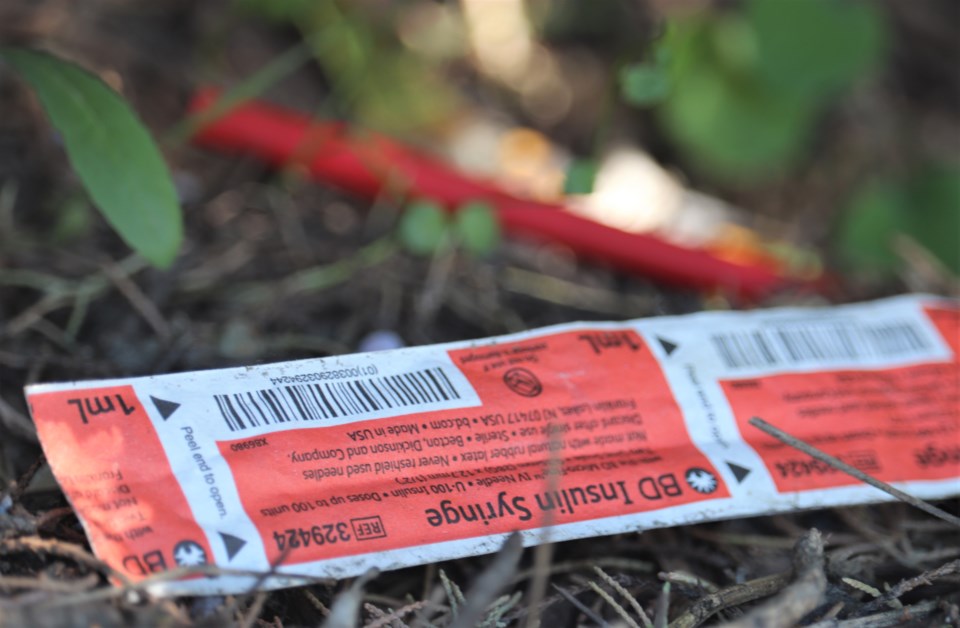 The wrapper from a needle. (via Brendan Kergin)

Kamloops needs more attention when it comes to needles.

That was the message communicated to Interior Health during the Aug. 14 council meeting after the health authority gave a presentation on the current situation when it comes to harm reduction, fentanyl deaths and needles in neighbourhoods. The presentation, given at Mayor Ken Christian's request, gave municipal politicians a chance to ask about community concerns in a public forum. While no new programs or plans were offered up, Dr. Trevor Corneil, the organization's chief health officer, told council they are involved in looking for solutions.

"We are funding peer engagement strategies," he said. "There is money on the table; I think it's about sorting out where the resistance is, or perceived resistance between bodies within government, and how we can mitigate those."

Later, speaking to media, he said the meeting provided a chance to hear concerns that have been expressed by the community.

"I think what we're hearing, and it's fair, is that there are needles lying (around) and we need to do more and so we're absolutely happy to be a part of that solution," he said. "We do our best in terms of the needles that we play in a role in collecting." 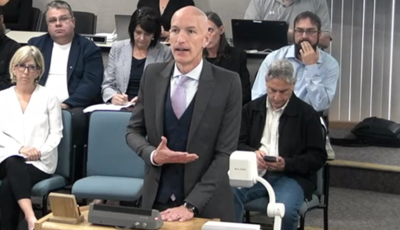 Christian says he believes Interior Health got the message, and hopes for more communication.

"I think that the points council wanted to make with respect to the community concerns around sharps were well stated," he tells KamloopsMatters. "I hope they would leave here with an understanding that we need to see more of them; we need to see more wrap-around services. We are concerned about the tragic loss of life in this community related to opioid use."

The long presentation and following questions, almost 90 minutes long, covered much of what the health authority does in relation to harm reduction and needle recovery. Councillors pushed to hear more about specific solutions to concerns people are bringing to them.

"We want people in our community to be able to go to the beach or to the park and not just be safe, but feel safe," Coun. Donovan Cavers said. "We voted in favour of the mobile sites because we do support harm reduction."

Coun. Ray Dhaliwal asked why the needle buyback program from two locals wasn't being supported by the health authority. Corneil said it's due to the money re-entering the black market.

Christian also brought up the need for more services outside of needle distribution and collection, to help curb the need for harm reduction.

"Our frustration comes from the fact we need another car 40, we need 24/7 wraparound services," he told the IH group. "We need to do more in Kamloops."

Services throughout the day and over the weekend was another major topic of discussion. 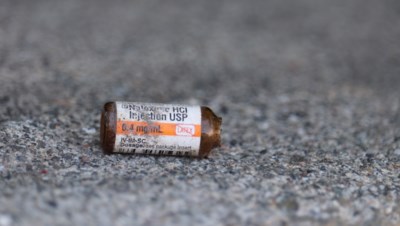 A Naloxone container. (via Brendan Kergin)

Coun. Dieter Duty brought up the importance of convenience when someone is addicted. Corneil noted stigma plays a role Interior Health's ability to create points of access, especially for people who don't want to use street-level access points like ASK Wellness. After the meeting, Christian noted the schedule for the safe consumption site is problematic when taking into context the nature of addiction.

"It's one thing to have a mobile consumption site, but to shut the thing done at 9 o'clock and not operate it on certain days doesn't make sense at all, because addiction is a 24/7 condition," he told KamloopsMatters. "We need to be there when those with that disease need the services; it's like an emergency department, they have to be there."

One thing city politicians and health authority administrators agreed upon was that the stigma around needles and addiction are posing barriers to the situation.

"We have neighbourhoods that are really quite agitated," Christian said. "That can counteract the good work we're trying to do."

Coun. Arjun Singh added the stigma may jeopardize the overall fight against addictions and overdoses.

"If we have people saying, 'Those people are causing sharps to occur,' we're losing the long-term battle," he said. "I think we really be conscious of the fact we're in a long-term process."

"I absolutely agree that it is a concern; it does create a perception problem," Corneil replied. "It is something that we want to be part of the solution for."

While needle disposal was central to the discussion, Corneil said an important part of the issue is public perception and an understanding of the issues, and he relayed a few facts. Kamloops has not seen a new case of HIV due to injection drug use in three years. He also noted there have only been two or three cases ever, globally, of someone stepping on a needle and ending up with HIV (due to the type of needle, it's virtually impossible for the virus to get into the bloodstream), though he agrees that doesn't alleviate fears parents have of their kids stepping on them.

Corneil also added that the number of needles distributed in Kamloops specifically isn't clear. While 257,000 were provided to the Kamloops area by the B.C. Centre for Disease Control last year, they get redistributed to different partners around the area, with some needles going to nearby places like Merritt and Chase. Collection numbers are also not available, according to the health authority.

And while needles from the Kamloops street community are an obvious problem, the health authority estimates 1,000 to 1,500 people live in Kamloops with opioid addiction, the majority of those not living on the street. Needle distribution for that population is often done through clinics, not street-level organizations like ASK Wellness.

Interior Health provided some other statistics during the presentation. The safe consumption sites have seen 7,100 visits, though there's no break down of that number when it comes to what people were visiting for and how many times individuals returned. At those sites, 22 overdoses have been reversed. Of those using, 20 per cent self-identify as First Nations, while only 9 to 12 per cent of the population identifies as First Nations.

"We know that Aboriginal people are very much over-represented in this crisis, so we are piloting the day treatment program with the friendship centre here in Kamloops," says IH administrator Rae Samson.

In the future, Christian says he hopes IH will have more contact with Kamloops council.

"They're concentrated in Kelowna and the difficulty we have is accessing medical health officer advice here in Kamloops," he said. "We want a more fulsome and comprehensive public health initiative in terms of this."

Miracle Theatre extends its Prince George run of ‘The Birds and the Bees’
Feb 17, 2020 3:05 PM
Comments
We welcome your feedback and encourage you to share your thoughts on this story. We ask that you be respectful of others and their points of view, refrain from personal attacks and stay on topic. To learn about our commenting policies and how we moderate, please read our Community Guidelines.