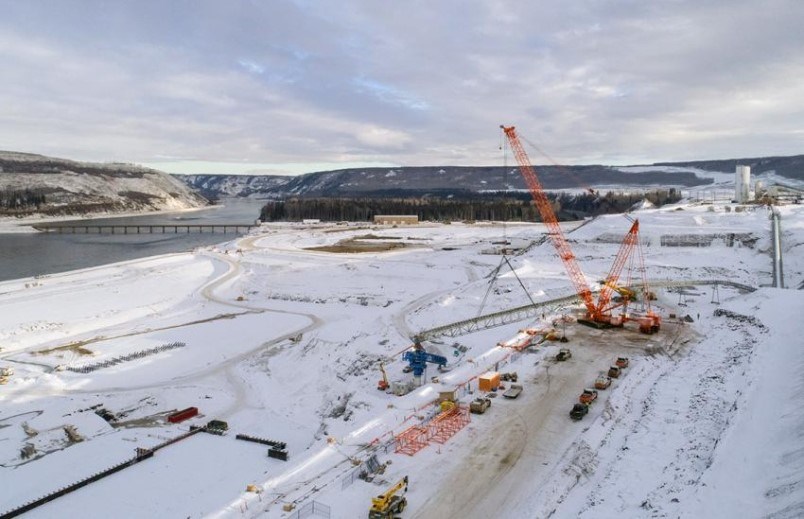 The workforce at Site C in northern B.C. saw a slight dip in September as the project heads into another winter season.

There were 4,790 workers counted on the project, down by 80 month over month from August.

Of those, 869 were Peace Region residents employed as construction and non-construction contractors, a decrease of 18 month-over-month, and representing 18 per cent of the project’s total workforce.

Locals make up 21 per cent of the construction and non-construction workforce total of 4,057 workers, which includes work at the dam site, on transmission corridors, reservoir clearing, public roadworks, and camp accommodations.

There were a total of 3,634 workers from B.C., or 76 per cent, working for construction and non-construction contractors, and in engineering and project team jobs.

BC Hydro reports 185 apprentices, 401 indigenous workers, and 517 women workers on the project.

There were seven temporary foreign workers employed in specialized positions, BC Hydro reported, and another 60 managers and other professionals working under the federal international mobility program, it said.

There were another 550 labourers and 400 engineers tallied.

There were nearly 600 carpenters and scaffolders employed, and another 300 construction managers and supervisors.

Prince George Spruce Kings end 2019-20 season with shootout loss to Express
Feb 23, 2020 9:35 AM
Comments
We welcome your feedback and encourage you to share your thoughts on this story. We ask that you be respectful of others and their points of view, refrain from personal attacks and stay on topic. To learn about our commenting policies and how we moderate, please read our Community Guidelines.