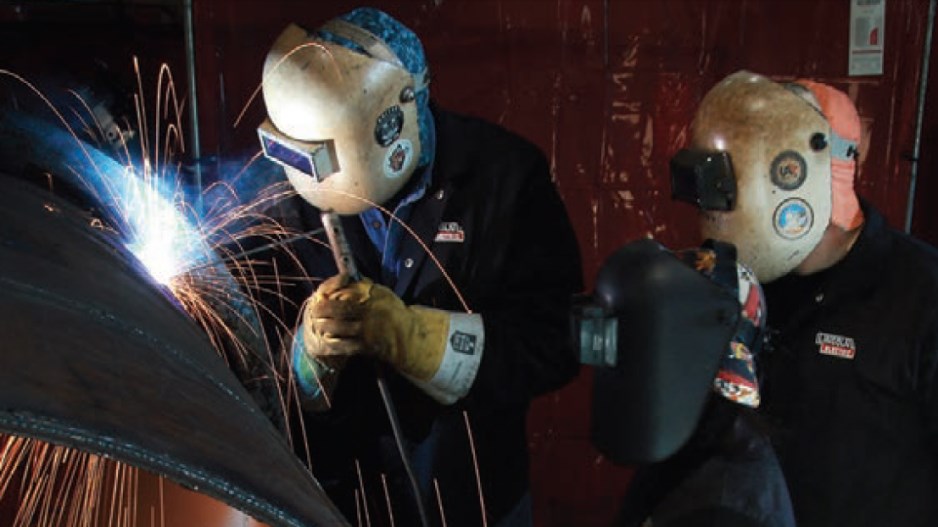 Starting this year, thousands of skilled labourers and tradespeople will be needed in B.C. for a handful of multibillion-dollar construction projects that will be underway — provided they don’t get halted by the courts.

Over the next two years, depending on when the various construction schedules peak, an estimated 10,000 to 11,000 workers will be needed in B.C. for three major projects: Site C dam, LNG Canada and Coastal GasLink pipeline. If the Trans Mountain pipeline expansion ever restarts, the number would rise to around 15,000.

That’s not including all the other projects that could also be underway, including Woodfibre LNG, construction of the new Pattullo Bridge, the Millennium Line Broadway Extension and expansions to ports and the Vancouver International Airport.

Construction industry organization BuildForce Canada has estimated 17,000 non-residential construction jobs could be needed in B.C. between 2019 and 2021, if all the major projects proposed — including Trans Mountain — were to move ahead on schedule.

“We should have shovels in the ground, beginning this spring, on (LNG Canada),” said Tom Sigurdson, executive director of the BC Building Trades. “Peak construction will be about 20 months after that, and peak will run for about five, six months.”

MacKinnon said the hiring in 2019 for the LNG Canada project would be in the high hundreds.

The bulk of construction hiring is expected to start in mid-2020 and ramp up to peak construction in 2021, with 4,000 to 4,500 workers needed for the LNG Canada project in Kitimat, and another 2,000 to 2,500 for the associated Coastal GasLink project.

According to Trans Mountain, 4,500 workers would be needed for its $7.4 billion twinning project during peak construction.

While BuildForce has warned that “stacked projects” could place a significant strain on B.C.’s skilled labour force, Sigurdson doesn’t think it’s going to be a problem.

BC Building Trades, which represents 40,000 workers, works with industry, government and other unions to predict labour needs and co-ordinate between projects so that workers from across Canada and — if need be — the U.S. are available.

While high employment is a good problem for an economy to have, there can be negative consequences. For one thing, it can cause inflation, which can increase project capital costs, and when they are public projects, like bridges, the taxpayer foots the bill.

“There is some competition and a trickle-down effect in these big projects,” said Bob de Wit, CEO of the Greater Vancouver Home Builders’ Association. “They pull many labourers, and skilled labourers as well, from other parts of the construction industry. We’re also seeing a big ramping up of social housing construction in B.C., led by the government. And that’s a good thing, but the negative part of it is that it does drive labour rates at a time when we’re pretty much at full capacity.”

Seaspan Shipyards, which already employs 2,300 welders, pipefitters and other skilled trades workers, will need a few hundred more over the next two years, thanks to a recent contract to refit the Canadian Coast Guard’s Sir Wilfrid Laurier.

“We’re likely to require 200 additional welders, pipefitters, steel-fitters per year for the next two years as we ramp up to what we hope to be a steady-state labour force to manage all of the work that we’ve got under the National Shipbuilding Strategy,” said Tim Page, vice-president of government relations for Seaspan Shipyards.

“The question whether we’re worried about being able to access that group (of workers) — the answer is yes.”

Seaspan works with trades colleges like the British Columbia Institute of Technology (BCIT) and Camosun College to provide the skills training it needs.

About half of B.C.’s construction trades workers are BCIT graduates. About 1,200 apprentices in the trades graduate from BCIT each year. But many of the graduates are replacing workers who are retiring.

BuildForce has estimated that large projects in B.C. would require 14,200 workers between 2018 and 2022, but that as many as 8,700 could retire over that same time period.

“There has been a lot of discussion about retirement and the skill shortages looming,” said Wayne Hand, dean of the School of Construction and the Environment at BCIT. “I think we are starting to see that happen now. With things like LNG starting up, and then a lot of other large infrastructure projects — hospitals — even though the residential [sector] may be softening, I still think there’s going to be a high demand for skilled workers in this province.”

BCIT and other career colleges aren’t the only institutes that offer skilled trades training. BC Building Trades also offers training programs. It graduates about 700 workers with Red Seal certification each year.

BC Hydro also has its own training centre in Surrey and spends $20 million a year on trades instruction. Every year, the utility hires 400 apprentices, pre--apprentices, co-op students and technologist and engineering trainees to work on projects.

Getting foundational skills through a college is one thing, but skilled trade workers also need apprenticeship training, which is why the BC Building Trades is so supportive of the project labour agreement — called the Community Benefits Agreement (CBA) — that the BC NDP government has adopted for large public infrastructure projects such as the Pattullo Bridge replacement.

Under the agreement, up to 25 per cent of the workers hired on a project must be apprentices, and there are preferential hiring policies designed to attract more women and First Nations to the skilled trades.

“We have to build up our number of apprentices on these projects, which is why I’m such a big fan of the CBAs,” Sigurdson said. “We need to get more apprentices into the system, otherwise … within five to eight years we’re going to have a terrible shortage.”

LNG Canada has also agreed to a 25 per cent apprenticeship hiring target.

“Generally, there’s been a poor job done of filling the bench strength of the apprentices needed to go into the trades,” MacKinnon said. “So we all committed to the 25 per cent.”

Evolving science reason for inconsistent messaging on COVID-19: Tam
Oct 22, 2020 12:35 PM
Comments
We welcome your feedback and encourage you to share your thoughts. We ask that you be respectful of others and their points of view, refrain from personal attacks and stay on topic. To learn about our commenting policies and how we moderate, please read our Community Guidelines.