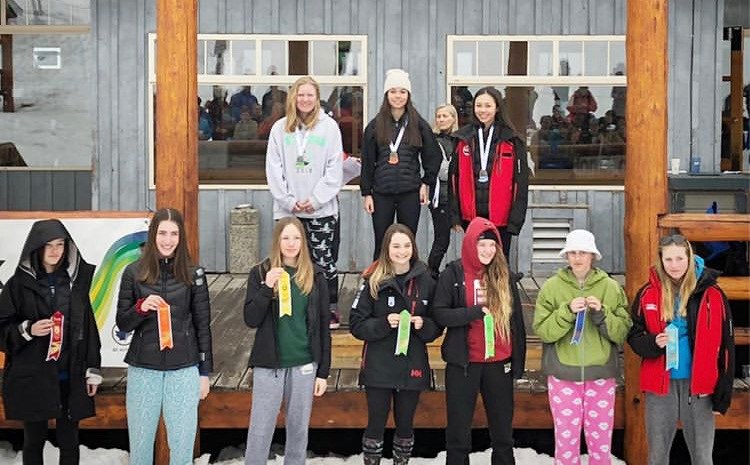 Melinda Kobasiuk (back row, 1st left) poses with other racers in Penticton, winning a gold & silver at U-16 provincials (via Instagram/Prince George Alpine Ski Club)

More than 50 of B.C.’s best alpine skiers under the age of 16 descended on Penticton this past weekend, but a Prince George woman stood out on the final two days of competition.

Melinda Kobasiuk conquered the Okanagan slopes Saturday (March 23) with authority, carving Apex Mountain with speed and grace to win gold in the ladies’ slalom race with a time of 1:29.83.

The 16-year-old just edged out second-place Noa Rogers (Apex) by 1.06 seconds on her home turf, and 1.22 ahead of third-place Jaden Dawson (Whistler).

On the last day of provincials (March 24), the second ladies’ slalom race commenced and Kobasiuk managed to step onto the podium again.

This time, the Prince George athlete settled for the silver medal with a time of 1:33.03, nearly missing out on another gold by a little more than half-a-second on Rogers (1:32.50).

She beat out Dawson once again, who got another bronze 0.29 seconds behind her.

Kobasiuk also competed in the ladies’ giant slalom, crossing the finish line in 14th and 11th on Thursday (March 21) and Friday (March 22) respectively.

Erica McCallum was also represented B.C.’s northern capital at the U-16 provincials, finishing in the top 40 for the weekend slalom races.

The next stop for the Prince George Alpine Ski Club is Smithers for the TECK North Zone Finals, scheduled for April 5 to 7 at Hudson Bay Mountain.

Perfect Purden run for Prince George alpine skiers
Mar 4, 2019 3:35 PM
Comments
We welcome your feedback and encourage you to share your thoughts. We ask that you be respectful of others and their points of view, refrain from personal attacks and stay on topic. To learn about our commenting policies and how we moderate, please read our Community Guidelines.