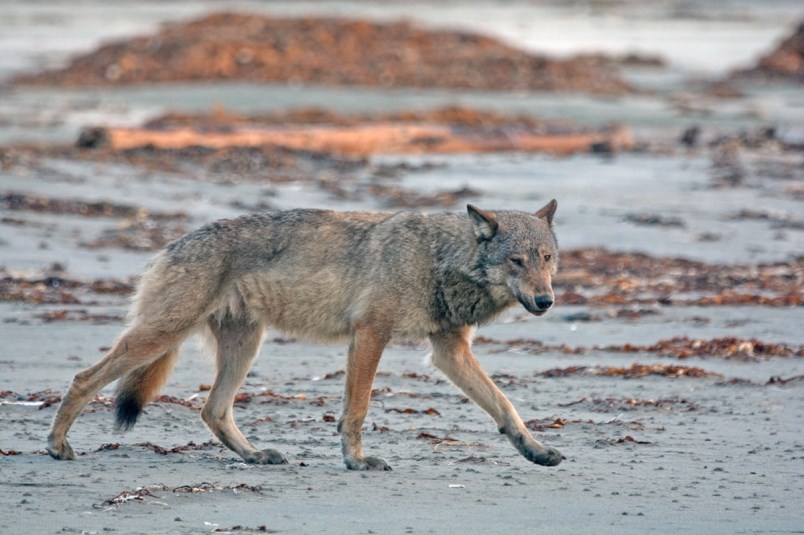 “Aerial gunning of wolves was deemed the most effective and humane way of removing all the wolves from each pack," says an August report from the B.C. Ministry of Forests, Lands, Natural Resource Operations and Rural Development. (via Jacqueline Windh)

The B.C. government wolf management plan involves radio-collaring single wolves and then killing the rest of the pack while leaving the lone wolves alive.

As part of 2015-18 plans to facilitate a seemingly successful mountain caribou recovery in the South Peace region, wolves were caught and radio-collared to allow their packs to be tracked.

Pack members would then be tracked by helicopter and shot.

“Aerial gunning of wolves was deemed the most effective and humane way of removing all the wolves from each pack,” said an August 2019 report from B.C. Ministry of Forests, Lands, Natural Resource Operations and Rural Development wildlife biologist Mike Bridger.

“The radio-collared individuals were often left alive following the conclusion of the winter reduction efforts in order to facilitate the location of wolves the following winter.”

The culling of wolves has been done in order to reduce their predation on threatened Central Mountain caribou populations.

The report said industrial activity in the region has led to some forest areas re-establishing themselves after human disturbance. That make such lands prime territory for moose, a primary prey species for wolves. That led to increases in wolf populations.

“Wolf predation in the South Peace was occurring at rates that were unsustainable for caribou populations, leading to rapid population declines,” Bridger reported.

Initially, attempts were made to retrieve wolf carcasses but the government deemed it to be “an inefficient use of time, effort and funds.”

The locations were later provided to First Nations for retrievals. Those nations also assisted the cull with ground trapping.

Caribou populations began to show a resurgence starting in the second year of the cull.

“The overall results measured during the five-year wolf reduction program suggest that the reduction of wolves to low densities can have significant, positive effects towards caribou populations,” the report said.

Protection of caribou has been controversial in the South Peace for several years.

Caribou numbers in southern mountain caribou herds around Chetwynd and Tumbler Ridge have dropped from between 800 and 1,000 in the 1990s to around 230 today. While a few herds in the region have already been extirpated, biologists say the entire population likely would have been wiped out by 2020 without predator control and maternal penning starting five years ago.

Earlier this year, the province imposed what it calls temporary moratoriums on industrial activities in the Mackenzie-Chetwynd-Tumbler Ridge areas to protect remaining herds.

The moratorium was one of 14 recommendations made by Blair Lekstrom, an area MLA and Liberal cabinet minister. Now a Dawson Creek city councillor again, Lekstrom was hand-picked by Horgan to liaise with local governments and the public following a major backlash against the province's proposed plans.

Caribou habitat restoration may be ineffective in the short term
Nov 28, 2019 1:05 PM

Caribou plan will go forward with or without consensus, province says
Nov 9, 2019 7:05 AM