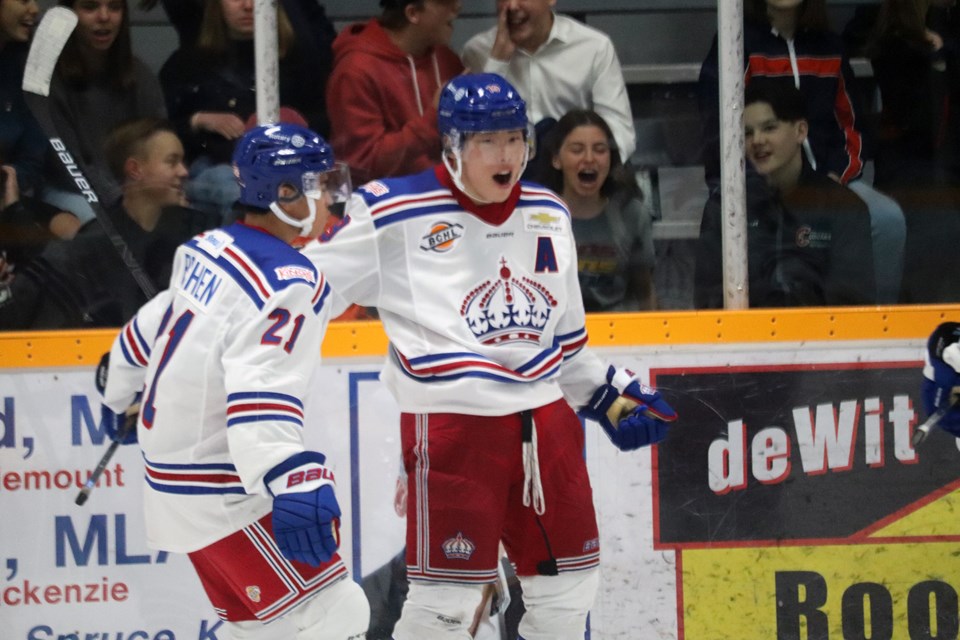 Home really is sweet once again for the Spruce Kings.

Thanks to a pair of captains, Prince George was able to erase a two-goal deficit last night (Nov. 1) and pot four straight en route to a 4-2 win against the Langley Rivermen at the Rolling Mix Concrete Arena (RMCA).

Nolan Welsh recorded three points in Friday’s contest, the second time he’s reached that feat this season, by scoring two goals, including the tying and game-winning markers, and adding an assist.

Chong Min Lee now has five multi-point games in the 2019-20 season after posting three of his own against Langley, including the empty-net insurance goal and two assists, both on Welsh’s goals.

Jett Alexander was the busier of the two goaltenders at the RMCA, turning away 34 of 36 shots, while the Rivermen’s Braedon Fleming made 25 saves on 28 shots from Prince George.

The game didn’t see any activity until the second period, in which all four goals came on a man-advantage.

Langley opened the scoring 1:58 into the middle frame and followed it up with a 2-0 lead six minutes later.

Preston Brodziak then capitalized on a power-play for his seventh of the season with four minutes to go in the period; the assists from Jaxon Steele and Tom Richter.

Welsh followed 1:50 after that to tie the game at 2-2 on another power-play before heading into the locker-room, with Lee and Mason Waite providing the helpers.

Welsh’s game-winning goal came at 11:28 of the third period and Lee’s lamp was lit with two seconds left in regulation.

Prince George’s jumps up to third in the Mainland Division with a record of 7-9-2-1.

The Spruce Kings are back in action to wrap up the weekend doubleheader with the Rivermen tonight (Nov. 2), 7 p.m. from the RMCA.

New month, same exciting action on the ice around the BCHL as we were back with a full 8️⃣ game schedule on Friday night!

Check out some of the best highlights in #BCHLin60 presented by @ChevroletCanada! pic.twitter.com/6QwPgYV8yB

A leader’s return ends in triumph for Prince George Spruce Kings
Oct 19, 2019 8:30 AM
Comments
We welcome your feedback and encourage you to share your thoughts. We ask that you be respectful of others and their points of view, refrain from personal attacks and stay on topic. To learn about our commenting policies and how we moderate, please read our Community Guidelines.