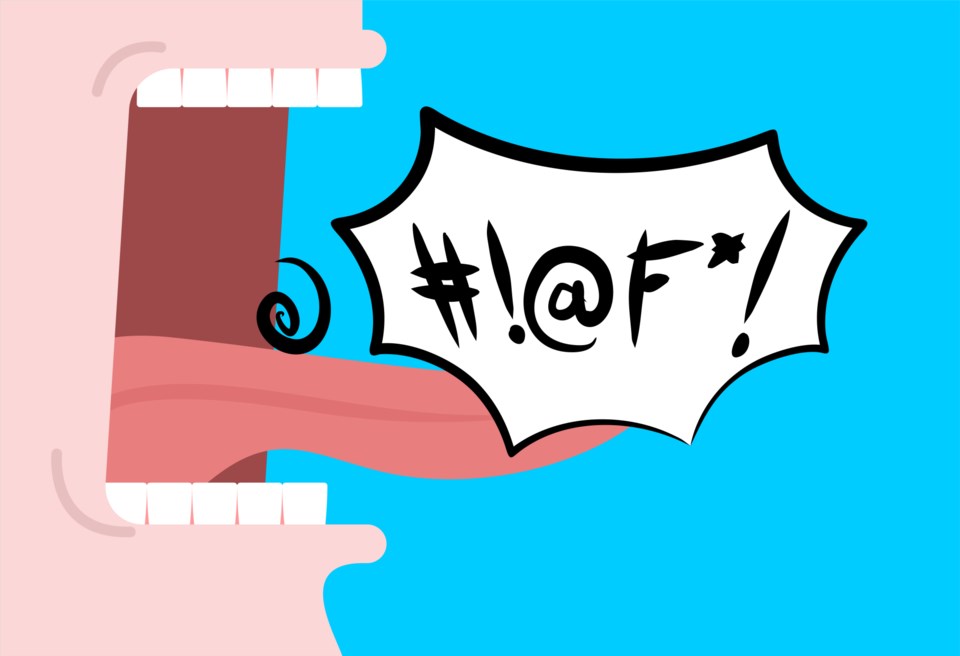 Earlier this year, a Research Co. survey found that almost two-thirds of Canadians (64 per cent) witnessed someone swearing in public. The poll was an early effort to look at the state of manners in our country and pinpoint some regional and generational differences.

There are many reasons that compel Canadians to swear. There is a difference in the words that we might use or hear when someone cuts us off the road while driving, or to describe the disappointing actions of a co-worker to a supervisor.

This time, we asked Canadians about the words they hear and the words they use in four different types of conversations that may happen throughout the course of a regular day. The results show that there are situations where familiarity enables us to curse, and others where manners seem to prevail.

For starters, more than half of Canadians say they hear swear words “frequently” or “occasionally” when they are talking with friends (68 per cent), strangers (55 per cent), relatives (53 per cent) and co-workers (52 per cent).

While more than one in four Canadians (27 per cent) say they never hear curse words in the workplace, the proportion drops when it comes to listening to relatives (15 per cent), strangers (14 per cent) and friends (10 per cent).

In three provinces — British Columbia, Saskatchewan and Manitoba — seven in 10 residents (70 per cent) report hearing swears from their friends “frequently” or “occasionally.” The most bleepable workplaces appear to be located in Ontario, where 54 per cent of residents say their co-workers swear.

The first question deals with what we remember hearing. When it comes to our own choice of words, most Canadians (52 per cent) admit to uttering swears “frequently” or “occasionally” when they are having a conversation with friends, but fewer say they rely on curse words when chatting with relatives (40 per cent), co-workers (34 per cent) and strangers (23 per cent).

British Columbians lead the entire country in relying on swear words “frequently” or “occasionally” when talking with friends (56 per cent). Residents of Manitoba and Saskatchewan are first on personal swearing with relatives (45 per cent), co-workers (41 per cent) and strangers (26 per cent).

Age is a factor in what we say, more than in what we hear. Canadians aged 18 to 34 are decidedly more likely to swear when chatting with friends (73 per cent), relatives (55 per cent), co-workers (47 per cent) and even strangers (33 per cent) than their older counterparts.

There is no definitive rule on when and how it is acceptable to swear. Almost half of Canadians (48 per cent) admit that they sometimes alter the way they speak so as not to swear in front of certain people. The proportion of “conditional” swearers is highest among the youngest adult age group (57 per cent) as well as residents of Saskatchewan and Manitoba (52 per cent), Ontario (50 per cent) and British Columbia (50 per cent).

Just under two in five Canadians (38 per cent) say they always modify the way they speak to make sure they do not swear in public. This very polite group encompasses 40 per cent of women, 42 per cent of baby boomers and 43 per cent of Quebecers.

This leaves a small proportion of Canadians (14 per cent) who claim to never alter the way they speak, and who simply do not worry about it if a swear word comes out.

On a political basis, there is no difference in the public behaviour of Liberal and Conservative voters when it comes to swearing. Equal proportions of supporters of either party in the last federal election “always” (43 per cent), “sometimes” (43 per cent) or “never” (14 per cent) change the way they speak.

New Democratic Party (NDP) voters — who can point to these findings as proof of their long-standing assertion that Canada’s two major parties are the same — are less likely to “always” change their words (31 per cent) and more likely to “sometimes” do so (58 per cent).

Two findings leave us asking more questions. First, the gender gap is exceptionally pronounced when it comes to swearing in the workplace. While 46 per cent of women say they never curse when chatting with co-workers, the proportion drops to 35 per cent among men. This might point to men being more likely to get away with “locker room” talk.

Second, those in the 18-to-34 age group are the least likely to say that they never change how they speak to prevent curse words (nine per cent), compared to 15 per cent for baby boomers and 17 per cent for generation X. Canada’s youngest adults have grown up in a time of looser censorship guidelines, particularly when it comes to language on television, movies and music. It is not shocking to see four-letter words in their regular thesaurus.

Results are based on an online study conducted April 4 to 7, 2019, among 1,000 adults in Canada. The data has been statistically weighted according to Canadian census figures for age, gender and region in Canada. The margin of error, which measures sample variability, is plus or minus 3.1 percentage points, 19 times out of 20.