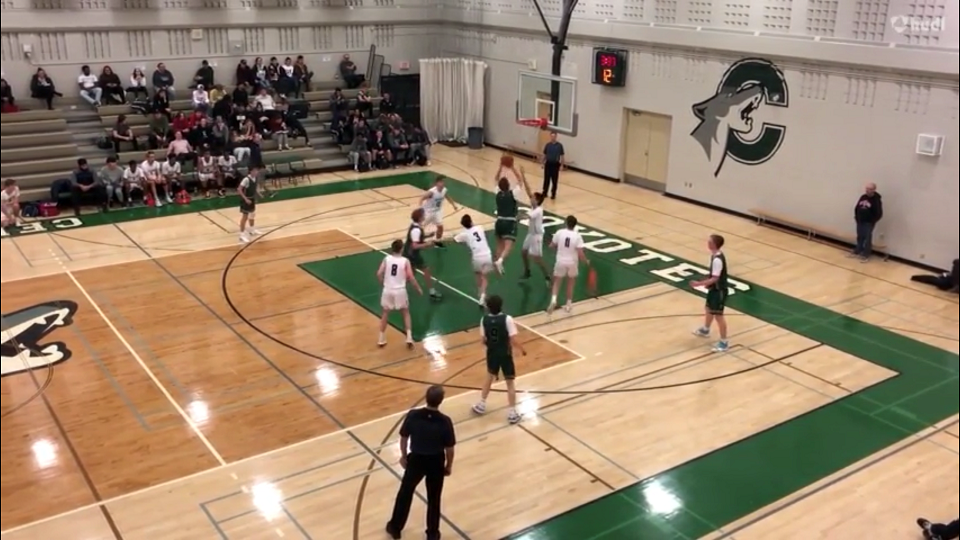 David Tiessen drives to the basket for Centennial High School in Calgary. He's committed to UNBC in Prince George for 2020-21. (via Screenshot/Hudl)

The men’s basketball program at UNBC has added another rookie guard to its 2020-21 roster as David Tiessen commits to the Timberwolves from Calgary.

The 17-year-old stands at six-foot-four and, as seen in his highlight reels online, he comes with sharp-shooting from field-goal range and an offensive edge at the basket.

In a team release today (May 29), he says he’s been wanting to play at the U Sports level since he was in Grade 10 and decided to stop at nothing until he earned his scholarship.

“I chose UNBC because they have a great program for basketball, and for school,” Tiessen explained after officially moving up to the Canada West ranks.

“They have a great campus, and the team is quite successful already. I like the way Coach Todd (Jordan) seems, and I have heard great things. Because of the COVID-19 situation, I haven’t been able to visit, but talking to Coach Todd, he made it very clear, and I believe UNBC is the best fit.”

Tiessen makes the move to Prince George after claiming Centennial High School’s Athlete of the Year twice for his strong athleticism and work ethic.

The Calgary product describes himself as a versatile player on both sides of the ball and hopes to develop those skills quickly to adjust to university basketball.

“I love basketball because I am able to compete with others around me, and have a sense of community with my teammates. I am able to push myself to become a better athlete and player.”

T-Wolves Head Coach Todd Jordan took note of Tiessen’s speed and size when scouting players for next season and commends the Calgary Basketball Academy for training his latest recruit.

“David is a big guard who can shoot the ball and is a good athlete. I am looking forward to helping him develop as he starts his college basketball journey.”

In the classroom, Tiessen plans to study commerce and marketing.

Size and versatility: Two elements UNBC’s latest women’s basketball commit hopes to bring
Apr 28, 2020 6:35 AM
Comments
We welcome your feedback and encourage you to share your thoughts. We ask that you be respectful of others and their points of view, refrain from personal attacks and stay on topic. To learn about our commenting policies and how we moderate, please read our Community Guidelines.