The back and forth continues: UNBCFA responds to university's public release of bargaining proposals 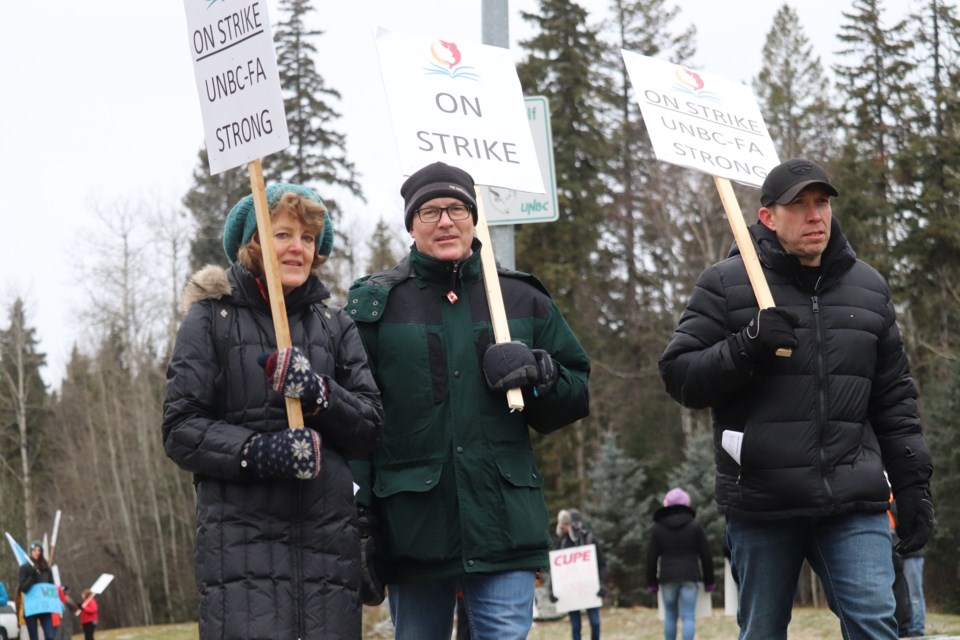 UNBC Faculty Association members went to the picket lines on Nov. 7, 2019 in response to negotiations with the university (via Kyle Balzer)

It's now a back and forth between UNBC and its faculty over bargaining details.

The university released a detailed breakdown of their recent proposal to the faculty association yesterday afternoon (Nov. 8) which has now prompted UNBCFA to release a version of events of their own.

They point refraining from making comments about the bargaining process, adding that it's "unhelpful" to make such comments in media.

"As you all know, we have refrained from commenting on moment-by-moment events at the bargaining table," a statement reads.

"It is our belief that airing the minutiae of those events is usually detrimental to our primary purpose: reaching a collective agreement. It is particularly unhelpful to make such comments in the media. With that in mind, we crafted a restrained bargaining bulletin yesterday, one in which we avoided trying to embarrass the Employer’s team."

"However, the Employer's Chief Negotiator has now made it necessary for us to describe the events of the last night of bargaining."

UNBC released highlights of their offer as well as compensation increase numbers.

We understand that not everyone is aware of the Employer’s proposals to the UNBCFA when talks ended on Thursday morning.

We have provided a detailed summary of the most recent proposals on our website. Follow the link provided: https://t.co/BAh2RZdAGm pic.twitter.com/yn6q3PK0P4

In the most recent release from the UNBCFA, they describe their version of events that took place on the night of bargaining which was Nov. 6.

The situation went into the early hours of the morning, almost 3 a.m., saying the employer (UNBC) were the ones that left the table.

"We apologize to our members for the lengthy and perhaps tedious nature of this recounting of events," the UNBCFA said.

"Though the Employer has attempted to suggest otherwise, we came to the table to get a deal, and were prepared to remain there until morning, and indeed, even as our picket lines went up. This is entirely normal in collective bargaining and is, indeed, the fastest way to end a job action."

A tweet was also issued by the UNBCFA detailing salaries of other univiersities across the country for comparison, while also detailing what the university is allegedly asking them to give up if they want a new salary structure implemented.

Strike notice was given by the UNBCFA on Monday (Nov. 4) before picket lines officially went up at the Prince George campus, the downtown Wood Innovation and Design Centre and the UNBC Terrace campus on Thursday morning (Nov. 7).

'It really comes down to one thing and that's respect': UNBCFA not backing down from fair agreement as strike looms
Nov 6, 2019 3:09 PM

UNBC releases detailed compensation numbers provided to faculty at bargaining table with ongoing strike
Nov 8, 2019 9:00 PM
Comments
We welcome your feedback and encourage you to share your thoughts on this story. We ask that you be respectful of others and their points of view, refrain from personal attacks and stay on topic. To learn about our commenting policies and how we moderate, please read our Community Guidelines.