The giant inflatable power outage duck is back with battle wounds

The jacuzzi duck now sports a black eye and stitch after his infamous windstorm incident
Sep 17, 2018 11:21 AM By: Hanna Petersen 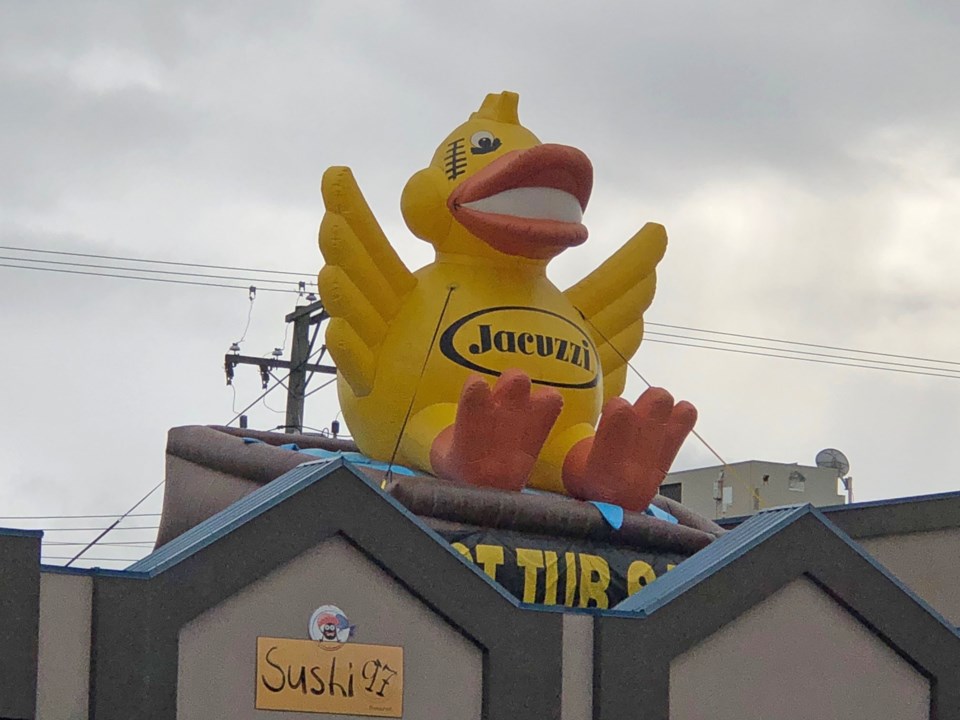 Eden Spas and Jacuzzi's giant duck went through quite a harrowing experience on Sept. 1. (via Hanna Petersen)

The inflatable duck that knocked out power during a windstorm is back in action and better than ever.

He now sports a black eye and a stitch as a subtle nod to mark his harrowing journey.

The duck, unofficially named Quackers by the staff at Eden Spas Jacuzzi, blew off the building’s roof during a windstorm on Sept. 1.

“In that windstorm, one of the seams split in the duck so it was still partially strapped to the roof,” says Eden Spas Jacuzzi owner/operator Matthew Vigue.

He says the front two straps gave way and the duck folded back and hung onto the power line, which runs from the main pole to the building.

Parts of the city then experienced a temporary loss of power.

“We still had power and all of our neighbours had power so we are not totally sure it caused the power outage,” says Vigue, adding they haven’t received a report from B.C. Hydro about the official cause of the power outage, “but that is what they are saying.”

He says what is more important is that they are grateful the fire department was able to respond so quickly and that B.C. Hydro was able to lift the duck back onto the building.

“We were worried about this. We don’t take this lightly,” says Vigue.

“We’ve had that duck on our roof for about 15 years on and off, so we didn’t want to make a joke about it.”

He tells PrinceGeorgeMatters once they read the comments from people about the situation and saw that everyone was having fun with it, they decided to jump on board.

“Nobody got hurt or anything serious like that so we said let’s have some fun with this; let’s not get defensive,” says Vigue. “We got the duck all fixed up and we put a black eye and a stitch on him and we didn’t say anything.”

Vigue says he wasn’t sure people would even notice but it has been an immediate hit.

“It’s just something funny. Kids have noticed and they’ve started laughing and telling their parents, and customers have come in laughing and we are having fun with it.”

Eden Spas and Jacuzzi only display Quackers during sales and special events throughout the year, and Vigue says they will probably leave the black eye and stitch up for about a week.

(Some) B.C. tenants can now be evicted
Jul 9, 2020 11:05 AM
Comments
We welcome your feedback and encourage you to share your thoughts. We ask that you be respectful of others and their points of view, refrain from personal attacks and stay on topic. To learn about our commenting policies and how we moderate, please read our Community Guidelines.