'It compensates our members fairly and establishes a baseline for productive future relations between UNBC and the UNBC-FA.'
Apr 6, 2021 1:50 PM By: Hanna Petersen 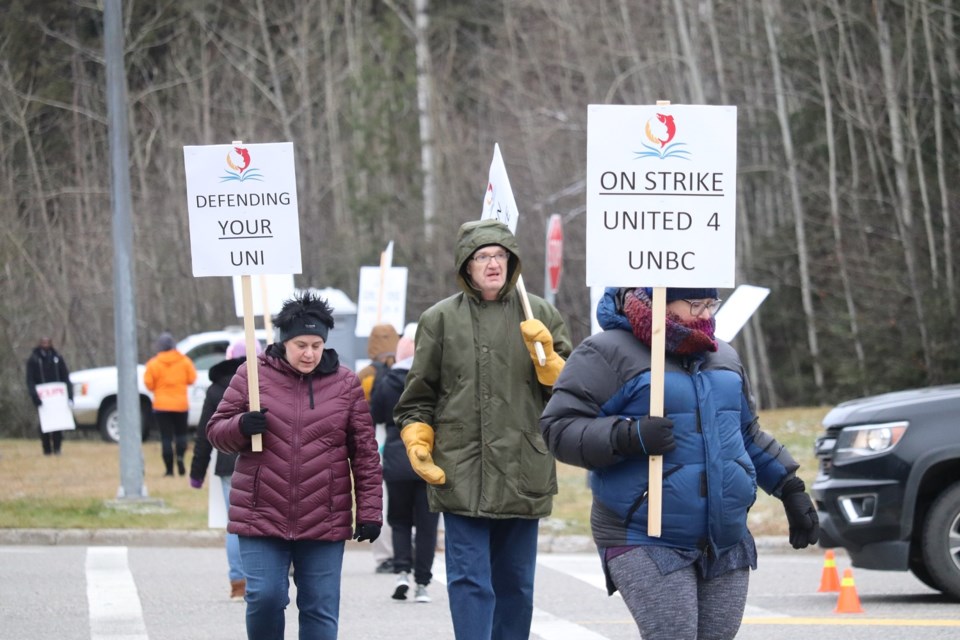 UNBC Faculty Association members went to the picket lines on Nov. 7, 2019 in response to negotiations with the university (via Kyle Balzer)

It’s a new day for the University of Northern British Columbia (UNBC) and its faculty.

A new agreement that sets the stage for a better era of labour relations has been ratified by the members of the University of Northern British Columbia Faculty Association (UNBC-FA) and UNBC.

“It compensates our members fairly and establishes a baseline for productive future relations between UNBC and the UNBC-FA. And we reached it through bargaining, not through an arbitrator’s award. We appreciate the work of UNBC’s leaders who rolled up their sleeves to reach a negotiated settlement with our union.”

In November 2019 job action saw faculty on the picket lines and students out of classes for three weeks, until UNBC-FA and the university agreed to arbitration over the issues of salaries ending the strike while the process was underway.

On Feb. 21, 2020 UNBC announced that former president Dr. Daniel Weeks decided to end his second term as President earlier than anticipated and was replaced by Dr. Geoffrey Payne as Interim President, who had been serving as acting president after Dr. Weeks took a medical leave earlier in the year.

The parties have now reached a freely negotiated agreement outside of the arbitration process, which represents significant progress in their renewed relationship. The agreement runs from July 1, 2019 to June 30, 2023, which allows time for some additional required committee work.

“Upon becoming Interim President, one of the first calls I made was to my colleagues in the Faculty Association with a goal to rejuvenate our relationship and move forward under the principles of open communication and respect,” adds UNBC Interim President Dr. Geoffrey Payne, in the release.

“I commend the Faculty Association leadership team and appreciate their willingness to renew our conversation. Over the past year we have developed a very strong foundation together upon which we can collectively build an improved labour relations environment leading into our University’s future.”

Consistent with the 2019 Sustainable Services Negotiating Mandate, the agreement includes general wage increases of 2 per cent per year, a redesigned compensation framework more in line with other post-secondary institutions, and other improvements meant to foster a productive labour relations environment.

It was reached under the B.C. government’s 2019 Sustainable Services Negotiating Mandate, which supports government’s commitment to improve the services people count on, make life more affordable and invest in sustainable economic growth.

The mandate is consistent with B.C.’s commitment to balanced budgets and sound fiscal management. It provides parties with the ability to negotiate conditional and modest funding to drive tangible service improvements for people in B.C.

What can a mediator do? Here's what could happen between UNBC faculty, school upon third party arrival
Nov 27, 2019 12:06 PM

'The future of our great university depends on our actions': UNBC faculty president
Nov 23, 2019 4:48 PM

'I have great respect for our faculty': UNBC Presidents Dr. Daniel Weeks opens up about ongoing negotiations with faculty
Nov 29, 2019 3:12 PM