‘The TSB report is clear in its findings that Enbridge’s operations were lacking’
Mar 4, 2020 2:35 PM By: Hanna Petersen 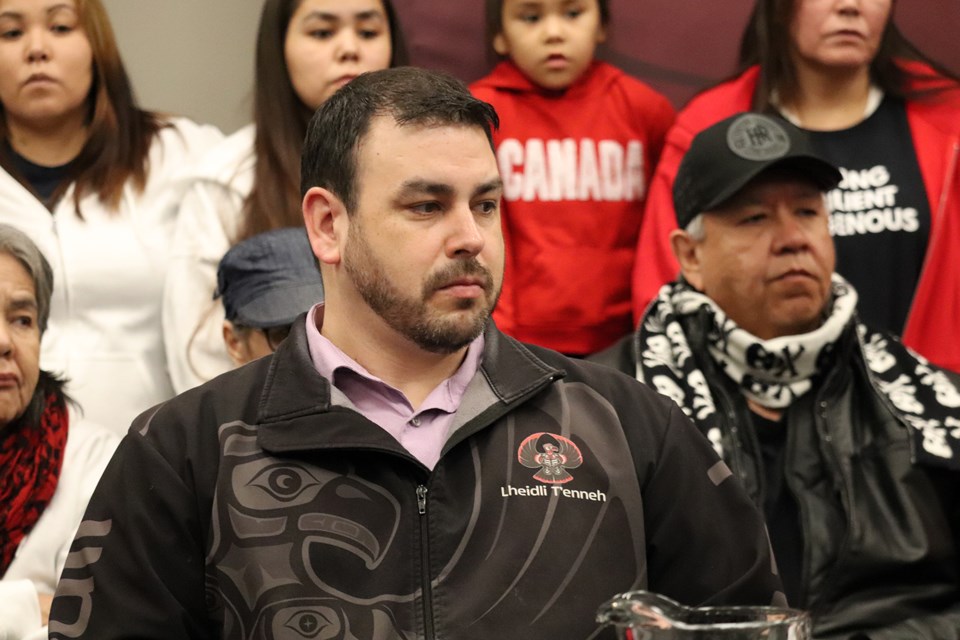 Now Dayi Clay Pountney and members of the Lheidli T'enneh First Nations look on as a lawsuit against Enbridge is announced. (via Jessica Fedigan)

Lheidli T’enneh First Nation is not pleased with the Transportation Safety Board of Canada’s (TSB) findings on the October 2018 pipeline blast.

On Oct. 9, 2018, roughly 13.5 kilometres north of Prince George, Enbridge's 36-inch pipeline exploded, which caused some 100 people in the Lheidli T'enneh First Nation to be evacuated.

TSB released its findings of the explosion's cause today (March 4) stating it occurred due to stress corrosion cracking.

“My community understandably remains very concerned about Enbridge’s operations through our territory, and for good reason. The TSB report is clear in its findings that Enbridge’s operations were lacking. They didn’t follow their own protocols with respect to safety inspection deferment,” says Dayi Clay Pountney in a news release.

He says TSB report further confirmed that Lheidli T’enneh was not included in emergency response exercises between 2014 and 2018, and only had one exit route out in the event of an explosion.

“It is my expectation that decision makers and investors in Calgary and elsewhere would agree with my community’s assessment that this is unacceptable. This does not amount to the safe, world-class transportation of hydrocarbons through our territory. Enbridge advises that this is critical infrastructure which is relied upon in B.C. and south of the border, and if this is the case, it is time to operate the lines as such. Step one is enforcing and implementing proper transportation and safety protocol.”

In Feb. 2019, Lheidli T'enneh filed a lawsuit against Enbridge in B.C. Supreme Court seeking damages and to have the pipeline immediately dismantled and removed from the territory and reserve and lands to be restored to their natural state.

“We stated from the beginning that our key concern was the safety of our members and other people living close to the gas pipelines,” Dayi Pountney added.

“We launched our lawsuit against Enbridge because we weren’t getting adequate and transparent answers. We now have some answers.  It is time for Canada to learn and improve from these mistakes.”

Lheidli T’enneh specifically identified the below segments in the TSB report as ‘shocking’:

“The integrity risk assessment report of the Westcoast system completed in June 2018 identified that the 4AL2 segment of pipe had been given the 2nd highest risk ranking for SCC.”

“The data from 2003 had identified nine cracks that were above the set reporting criteria.”

“In 2016, a deferral request was made through Westcoast’s inspection tracing tool without a documented rationale. […] The waiver form, which includes the required approval signatures, was not used to document the deferral of the EMAT in-line inspection for the 4AL2 segment.  Despite the absence of a completed waiver form, the in-line inspection for 4AL2 was deferred until Fall 2018. The investigation was unable to determine why the standard operating practices were not followed.”

“Despite the absence of a completed inspection deferral waiver form, the SCC EMAT inline inspection for the 4Al2 segment, scheduled for 2017, was deferred until fall 2018, resulting in the existing cracks remaining in the pipe undetected until failure.”

“The Lheidli T’enneh First Nation reserve, other communities, and operators of other pipelines near the 4AL2 pipeline segment were not included in any of Westcoast’s emergency response exercises between 2014 and 2018.”

“The NEB’s most recent audit of Westcoast’s regulated activities” in March of 2013 revealed that “Westcoast’s integrity management program did not meet the NEB’s expectations for a complete, robust, and fully implemented program.”

One Way Out of Community:

“In this occurrence, the residents of the Lheidli T’enneh First Nation reserve on the north side of the river self-evacuated using the only road leading out of the community. This road crosses over the pipeline right-of-way...”

Stress corrosion cracking cause of 2018 Enbridge pipeline blast near Prince George: TSB of Canada
Mar 4, 2020 7:35 AM

UPDATE: Enbridge responds to Lheidli T'enneh First Nation Notice of Civil Claim
Feb 27, 2019 11:16 AM
Comments
We welcome your feedback and encourage you to share your thoughts. We ask that you be respectful of others and their points of view, refrain from personal attacks and stay on topic. To learn about our commenting policies and how we moderate, please read our Community Guidelines.