It’s not quite like coming out of retirement, but one could compare the situation to Michael Jordan’s comeback to basketball almost 25 years ago.

Having missed the game for over a year after graduating College Heights in 2018, Jessica Nycholat has decided to once again pursue her dream of playing competitively on the post-secondary stage, officially signing with her hometown UNBC Timberwolves for the 2019-20 season.

“I really missed basketball,” said the three-time City All-Star in a team release. “I would see them practicing, and I really regretted not playing. I emailed Sergey and he invited me to practice. After my first practice, it was obvious. They are all so nice and I really loved playing with them.”

She also joins the Lady T-Wolves with provincial experience on her belt, suiting up for the Basketball B.C. Under-15 and Under-16 squads.

The now 19-year-old attended UNBC in her first academic year studying marketing and finance, but realized she also wanted to get back into a game she holds dear to her heart, especially after witnessing a historic year for the women’s program. 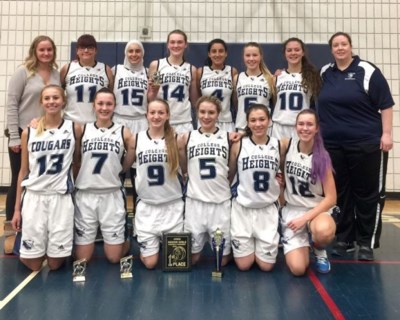 Jessica Nycholat (#7) stands with the College Heights Senior Girls Basketball team in her Grade 11 year (via College Heights Secondary Athletics)
“I come to all the games I can to watch them, and they have some very good players on this team. They have been so welcoming and so nice to me. They’re very supportive and help me a lot whenever I have questions. I feel like I have made friends with a lot of them.”

During her senior year as a College Heights Cougar, the five-foot-nine guard averaged 22 points and 10 rebounds per game, but understands adjustments will have to be made when competing in Canada West and U-Sports, the highest level of university sport in the country.

“I think I am pretty physical. I like to get a lot of rebounds, and I am strong in the midrange,” she explained. “Defensively, I will have to adjust. Where I would have helped when someone is driving, I shouldn’t fully help, because they will kick it out and shoot a three. And, they’re actually going to make it. Just spacing. There are a lot of things that are different at this level than high school, and I have been out of the game for a year. I am getting back into it and getting my shot.”

UNBC Women’s Basketball Head Coach Sergey Shchepotkin knew of Nycholat’s ‘well-rounded game’ when she was in high school and being part of the Junior Timberwolves program and was pleased to hear she wanted to lace up.

“I don’t think she knows how good she can be,” said Coach Shchepotkin. “She wants to be a part of this program, and she brings a passion to the court. She was an impact player in high school, and her work ethic and willingness to do the little things will help us moving forward.”

Nycholat will join the UNBC 2019-20 campaign in August for training camp.

Memorable season ends for UNBC women’s basketball team
Feb 17, 2019 8:35 AM
Comments
We welcome your feedback and encourage you to share your thoughts on this story. We ask that you be respectful of others and their points of view, refrain from personal attacks and stay on topic. To learn about our commenting policies and how we moderate, please read our Community Guidelines.